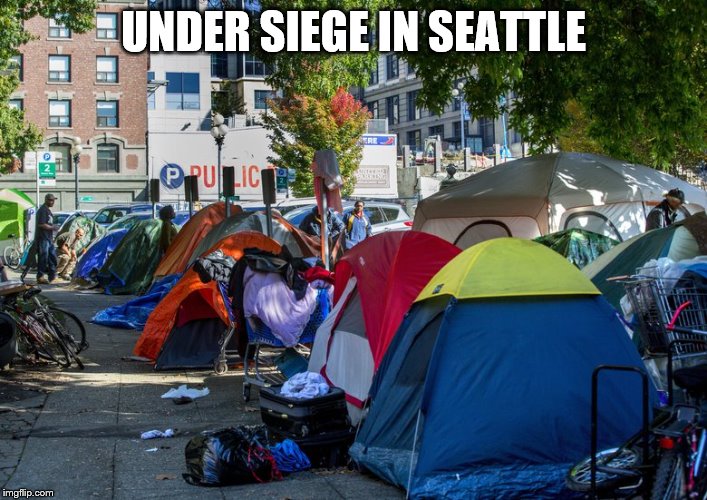 I don’t even know where to begin with this. Well, actually I do.

The demorat-run, liberal utopia of Seattle has a major homeless crisis.

The bureaucrats in that city and King County do nothing to actually address the real problems (drug addiction and mental health issues). Instead, they coddle the homeless and try to mislead the public on just how bad the homeless crisis is. Just search our web site for “Seattle” to read through the many posts I’ve done about their homeless/crime situation.

The King County prosecutor, Dan Satterberg, is a demorat who believes that “not all of society’s most complicated issues can be solved in a courtroom or with a prison cell.”

“There’s been a massive call to action after a damning report on the 100 most prolific offenders in Seattle. Business owners are fed up and want the criminals locked up for good. KIRO 7 has documented the same criminals being arrested over and over again. These offenders committed thousands of crimes in Seattle in just two months last year. Now, two-thirds of them are suspected of committing still more crimes since this report came out –107 new crimes in all.”

This liberal ideology of criminal justice reform (catch and release) and compassion for the homeless via taxation has resulted in zero deterrents in Seattle and King County for the criminals and homeless. Absolutely no deterrents.

Proof of this comes from MyNorthwest.com about a homeless criminal, with severe mental health issues, who attempted to kidnap a child. He has an EXTENSIVE criminal record:

“A 47-year-old man charged last week with a violent attempt to kidnap a 9-year-old girl and break into a South Seattle apartment has been arrested 104 previous times in King County over the last 14 years, according to court records.

Seattle police arrested Randolph Neil Humiston on May 30th at 14th Ave. South and South Henderson Street after he allegedly grabbed and dragged a girl on a playground, according to charging documents.

Prosecutors say the girl kicked and screamed at Humiston until he released her.

Ernesto Martinez, who lives a short distance from the playground told KIRO 7 he first saw Humiston when he broke into Martinez’s apartment while his family was having dinner. “I never saw him before, but I saw him, and I yelled and chased him,” Martinez said. Seattle police say Martinez chased Humiston for several blocks until patrol cars arrived and arrested Humiston — for the 105th time since 2005.

“I told the police that if he actually took a little girl, they would be arresting me instead of that guy. I mean, I’m not going to let that happen.”

Court records indicate many times, Humiston was released within a day or two after being arrested, and he consistently listed his address as the Compass Housing Alliance in Seattle, indicating he is homeless.

Prosecutors noted Humiston was placed in the jail’s psych ward in 2017, and would “likely commit an act of violence,” if released.

Records indicate a few of the cases were dismissed because Humiston was found to be incompetent.