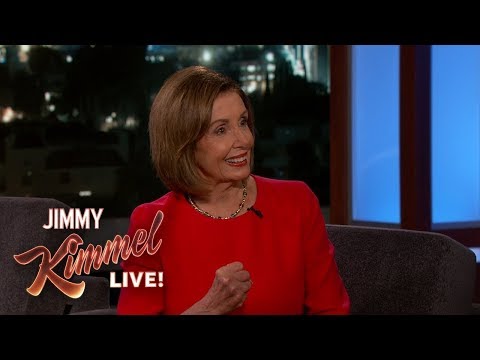 Opinion| Democratic House Speaker Nancy Pelosi recently made an appearance on “Jimmy Kimmel LIVE.” During her time on the air, Kimmel questioned her as to why she hadn’t moved forward with impeachment proceedings against President Donald Trump. Her answer was noncommittal to say the least. Kimmel managed to get Pelosi to say that House Democrats might be “on the path” towards impeaching the President.

DavidHarrisJr.com explains that the Dems “have to make absolutely sure that their case is ‘ironclad’ if they intend to move against him. Though Jimmy seemed as if he was a bit unhappy with that answer, he continued with the line of questioning in an attempt to get some hint as to whether or not they were going to move soon.”

“Yeah, we will,” Pelosi replied.

Nancy Pelosi teased that she knew more about the case against the president than anyone else in Congress.

“Let me just say this immodestly, I probably have a better idea as to what the president has to be held accountable than anyone,” she said.

Breitbart also reported that Pelosi “ridiculed the president and his team for feigning ignorance about the law when running for president.”

“How do you explain that to kids in the hood, when they are approached by law enforcement and they say ‘I didn’t realize that we’re supposed to know this or that,’ Well they’re supposed to know,” Pelosi stated. “But these very wealthy people with high priced lawyers can get away with saying I didn’t know.”

“It may sound disingenuous, but I hope the president didn’t do anything … we don’t want that in the United States,” Kimmel stated.

DavidHarrisJr.com explains that the word in recent weeks “seems to indicate that Pelosi knows going down the path of impeachment is almost undoubtedly political suicide for the Democrat party. She’s getting a lot of pressure from the radical side of the party to get Trump out of the White House, no matter what it takes, yet she knows that there isn’t anywhere near enough to build a case they can win. The closer we get to the next election, the more desperate they are getting, and it’s going to be interesting to see who sacrifices whom on the altar of Democratic Socialism.”

Join us at SPREELY if you want real news without the leftist censorship!