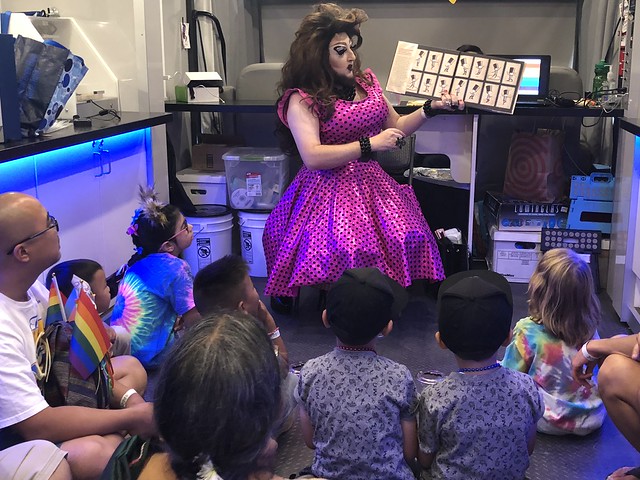 “Drag Queen Story Hour (DQSH) is just what it sounds like—drag queens reading stories to children in libraries, schools, and bookstores. DQSH captures the imagination and play of the gender fluidity of childhood and gives kids glamorous, positive, and unabashedly queer role models. In spaces like this, kids are able to see people who defy rigid gender restrictions and imagine a world where people can present as they wish, where dress up is real.” — DragQueenStoryHour.org

(INTELLIHUB) — Transgender drag queens who can proficiently read propaganda-laced books to adolescent crowds are in high demand in the month of June as the New York-based organization Drag Queen Story Time tours nationwide.

Don’t get me wrong — there is nothing wrong with being transgender or gay for that matter but why is this LGBT agenda being pushed onto children at such a young age? I mean after all, who is really behind this? Who is funding this organization? What message are the group’s funders ultimately peddling to these youngsters?

“You can be whatever you want to be at any time of your life it doesn’t matter,” one drag queen who spoke at the children’s Book Cellar pointed out to News Center Maine last Saturday.

“This is how I get into drag,” the drag queen explained. “I just float around and throw some things [women’s clothing] on.”

Moreover, the psychological operations (PSYOPs) continued in the Pacific Northwest last Saturday as “Drag Queen Story Time” played out at the South Portland Libray in what appears to be a concerted effort to indoctrinate the masses at a very young age.

“To me, it’s an event about celebrating yourself and celebrating just being fantastic,” one organizer told WMTW-TV 8.

The City of Spokane will be joining the “national trend” with plans to host Drag Queen Story Hour mid-month, as KREM 2 reports.

Residents in Rhode Island were not having any part of Drag Queen Story Hour. The show was canceled from the Bristol Free Library’s event roster after threats of violence flooded in.

What is the endgame of “Drag Queen Story Hour?”

What is the endgame of "Drag Queen Story Hour?"