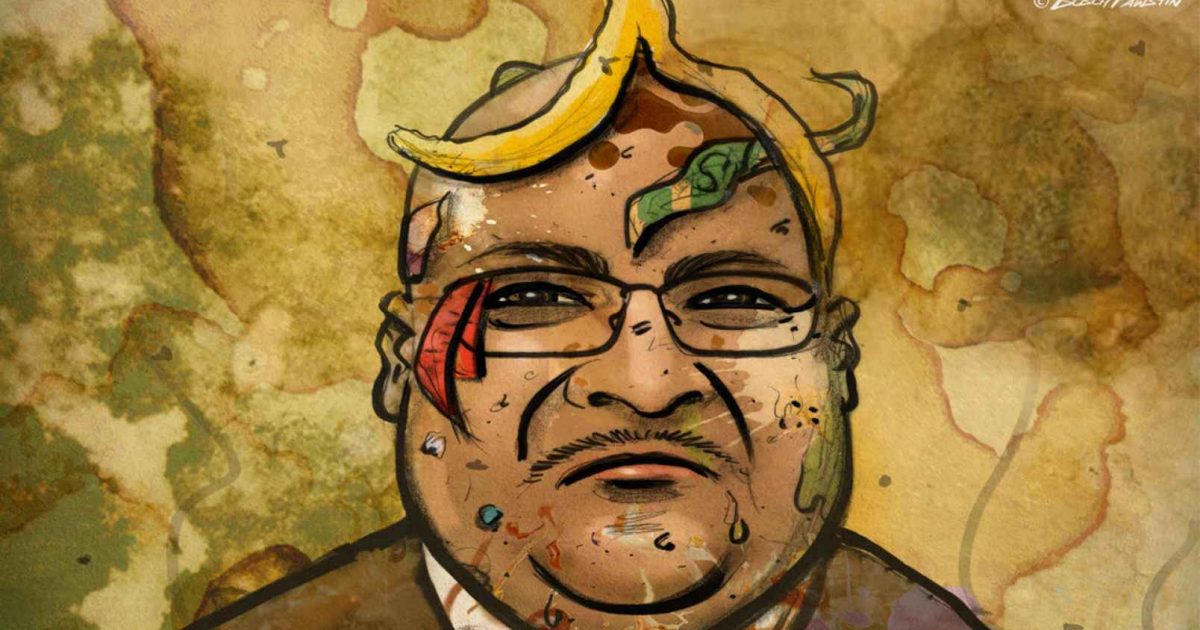 San Francisco has the highest rents in the country. At an average of $3,690 for a one bedroom, it’s more expensive than New York City, Hong Kong, Paris and London. The median price of a single-family home is $1.6 million. The median price of a condo is $1.17 million. The cheapest home in the city is a 765-square-foot unlivable wooden shack with no bathroom built in 1906 which can be yours for only $350,000.

Despite that, the City by the Bay is drowning in its own filth. San Fran is covered in human waste.

There have been 118,352 cases of human waste on the streets of San Francisco since 2011. That’s also when Mohammed Nuru (pictured above) took over as the head of the city’s Department of Public Works.

The Nigerian immigrant who calls himself Mr. Clean has been promising to clean up San Francisco back to the Willie Brown days. Brown, the notoriously corrupt city boss, had picked Nuru as his point man, after some assistance on political campaigns, appointing him DPW deputy director in 2000.

Nuru had gotten his start with SLUG, a social justice community gardening organization. His degree was in landscape architecture and San Francisco’s problem was its unbelievably filthy streets.

But Mr. Clean was a protégé of Mayor Brown and complaints quickly rose from DPW employees about corruption, discrimination and intimidation. DPW employees complained that he filled DPW positions with his own political allies from SLUG, diverted street cleaning funds to SLUG, and used public employees to improve areas near his home. DPW people who complained about Mohammed were demoted or transferred. If you crossed Mr. Clean, the word was that he would ‘clean you out’.

“Everybody was scared of Willie Brown,” a former DPW maintenance manager who was forced out for resisting Mohammed Nuru’s alleged abuses said. “Nobody wanted to do anything about it.”

Nuru had been a Brown campaign volunteer before he even became a citizen. And had allegedly forced SLUG employees to campaign for the corrupt San Fran boss, telling them that their jobs depended on it.

Mohammed Nuru landed a top job at the DPW where he promised to “get rid of those white managers.”

It was the first of an endless series of scandals involving the Nigerian community organizer who keeps promising to clean up a city that, like its DPW boss, only keeps getting dirtier every year.

By 2004, four years later, Mohammed Nuru had been banned from any further dealings with his old SLUG buddies after the social justice group was accused of pressuring workers to campaign and vote for Gavin Newsom in the city’s mayoral election. (Newsom has since become governor of California.)

SLUG employees were once again being told that they would lose their jobs if Newsom didn’t win.

The event at which SLUG employees, many of them homeless or ex-cons, were forced to cast absentee ballots had been sponsored by Attorney General Kamala Harris. (Brown’s other protégé has since become Senator Harris and is running for the Democratic presidential nomination in 2020.)

Kamala Harris’ campaign manager admitted to being in contact with Mohammed Nuru during the election and SLUG workers filled up Harris events.

Harris and Newsom both claimed not to know anything and called for a full investigation. Like all the other Nuru investigations, this one led to absolutely no meaningful results.

Meanwhile, San Francisco kept getting dirtier in both the literal and metaphorical senses.

Ed Lee, Nuru’s boss at the Department of Public Works, had done such a fantastic job that the Board of Supervisors appointed him to run the city after Newsom moved up the Democrat ladder that began in a San Francisco sewer and ended in Sacramento. Lee, like Nuru, had been something of a community organizer. Then the boss, who would later be on top during the purge of DPW personnel who objected to Nuru’s behavior had been implemented, had overseen a whistleblower program. And now, mayor.

Despite the scandals, Mayor Ed Lee appointed Mohammed Nuru to his old job as the Director of DPW.

“Mohammed Nuru is a dedicated public servant who has proven over the last decade to be one of the hardest working City employees keeping San Francisco clean, green and beautiful,” Lee claimed.

Nuru had been at it since 2000. And nobody would describe San Francisco as clean.

Mr. Clean was hard at work on the job.

And San Francisco’s Department of Public Works was the worst disaster of them all. Mohammed Nuru had begun his tenure with accusations of election scandals and discrimination against white DPW personnel. By 2009, he was being accused of discriminating against black women.

Nuru had allegedly told an African-American manager investigating discrimination complaints that she “needed to know her place and show proper respect”.

Other employees were reportedly told, “You may want to stay away from her. You’d better watch being around her because Mohammed would not be happy with you.”

Then she was fired.

Taxpayers paid out $105,000 in a settlement, but Mohammed Nuru got a promotion.

Keeping Mohammed happy has been a bigger priority for San Fran Democrats than a clean city.

Fortunately, DPW had a plan.

Between 2013 and 2018, human waste incidents had increased by over 200%. But DPW had paid a public relations firm $408,745 to produce reports claiming that San Francisco was spotless.

Even as the city was drowning in trash, the PR firm gave it the highest cleanliness marks ever.

Mohammed Nuru replied by conceding, “They might have sampled some of the nicer parts of the city.”

Nuru has failed miserably at cleaning up San Francisco. The city is now much filthier than when he started by metrics other than those produced by a PR firm being paid to tell a story no one believes.

The Nigerian immigrant, with a degree in landscape architecture from Kansas State, and a job at a politically connected social justice non-profit, was never qualified to run an organization with a $312 million budget and over 1,600 employees. He’s been followed by scandals, election scandals, discrimination scandals, and abuse of power scandals, from the very beginning.

The street cleaning budget has doubled and the waste has quadrupled.

Willie Brown is in disgrace. Ed Lee is gone. Gavin Newsom is governor. Kamala Harris sits in the Senate.

“I will say there is more feces on the sidewalks than I’ve ever seen growing up here,” San Francisco Mayor London Breed said.

So why hasn’t she replaced Mohammed Nuru?

Breed, like Nuru and Harris, also got her start as a Brown protégé. And there is one more rumor.

“One lengthy, handwritten, anonymous letter, obviously from inside the agency, mentioned another more personal reason — ‘He dated London Breed’ (several other DPW sources also said they were aware of this, and one even hinted it may not be a thing of the past),” a letter column mentions.

Why is San Francisco filthy? It’s not the homeless. They just make it dirty. It’s the politicians who keep it dirty. Drug addicts may scatter needles on the street, but Democrats keep Mohammed Nuru on the job.