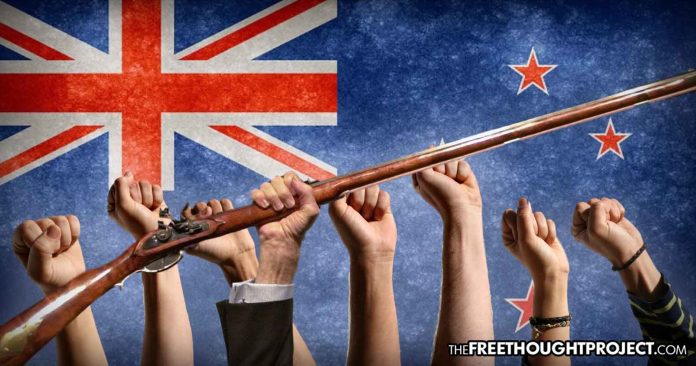 In March, New Zealand Prime Minister Jacinda Ardern announced the “first tranche” in a number of moves to restrict the rights of New Zealand citizens to protect themselves with firearms. This move was in direct response to the horrific murders that unfolded on March 15. Coincidentally, this is the exact move the terrorist who carried out these attacks had hoped for and predicted. The good news is, however, that most citizens are refusing to turn in their guns.

The terrorist who murdered 50 people earlier this year was engaging in a classic propaganda of the deed in which he predicted—accurately—that his murder would spark the restriction of gun rights. Lawmakers took his bait.

“On 15 March, our history changed forever. Now, our laws will too,” said Ardern as she carried out the will of this terrorist. “We are announcing action today on behalf of all New Zealanders to strengthen our gun laws and make our country a safer place.”

“What we’re banning today are the things used in last Friday’s attack,” she said, adding: “It’s about all of us, it’s in the national interest and it’s about safety.”

According to a new report from the NZ Herald, however, the citizens feel “safer” by holding on to their guns.

It is estimated that roughly 250,000 people own the recently-banned semi-automatic weapons in New Zealand. Estimates show that these 250,000 gun owners — who were turned into criminals overnight by their government — own around 300,000 firearms.

Since the government attempted to disarm these 250,000 people, only 530 guns have been turned in.

Government officials are attributing the lack of gun turn-ins to citizens wanting to be properly compensated for their weapons. However, the complexity of this situation is likely far different.

“If they are being serious about their considerations and ensuring that there is fair and reasonable compensation, then firearm owners will wait a bit longer to make sure it is just and it is fair when it is received,” Nicole McKee, Secretary of the Council of Licensed Firearm Owners, told the NZ Herald.

“We are effectively being punished for the acts of a foreign terrorist, and we want to make sure that our personal and private property is adequately compensated when it is confiscated,” she said.

But in reality, the people likely don’t want to disarm themselves as this is their only defense against these terrorists. Sure, people don’t simply want to be robbed of their property without compensation. However, there is no amount of money that can compensate someone into being defenseless.

As TFTP has previously noted, depending on the current government, life in disarmed societies can go on peacefully for a while. However, in some cases, citizens — men women and children — are slaughtered by the millions as corrupt government officials and criminals become the only ones to have guns.

Even when gun control seems to work in the short term, the scapegoatists are never satisfied. As we are seeing in the United Kingdom, politicians are now going after knives as the “evil weapon” that no law-abiding citizen should ever need.

Simply put, guns — in the hands of good people — level the playing field against guns in the hands of bad people. It is this simple. As this tragic case illustrates, bad guys will always have access to guns, even if you use laws to disarm them.

The protectionist attitude of taking guns from law abiding citizens to keep guns from criminals is ineffective, self-serving, one-sided and ignores the benefits of an armed society as well as history. And, it only serves to further the oppression of those who cannot defend themselves.

While it would certainly be an amazing thought to be able to live in a world without guns, that is simply not the case. Until it is the case, anyone who wants to defend themselves and their family, should be able to do so in any manner they see fit — as the only other option is tyranny.