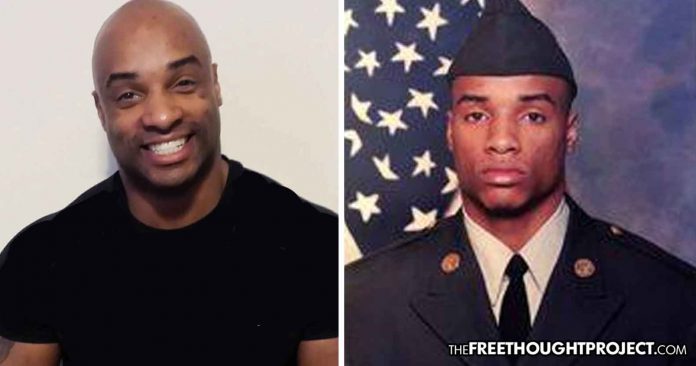 York County, PA – Everett Palmer Jr. was an honorably discharged United States Army Veteran and a father of two before he died mysteriously in police custody last year. Now, the local coroner is claiming that the cause of death is from one thing and the family’s private investigation reveals something entirely different. For the last year, Palmer’s family has been demanding to know what happened and why several of his organs and his throat were taken without notice.

Everett graduated from Martin Van Buren High School before he honorably served in the US Army as a paratrooper. He was also the father of two children and was gainfully employed as a personal trainer when he turned himself in over a misdemeanor traffic offense and died days later.

The family was not notified that the 41-year-old dad was in critical condition, and it was not until they were being informed of his death that they found out he had been spent the last two days of his life in jail, according to a report from the York Dispatch.

“My son was not a troublemaker, not at all, he was a very gentle, kind man. So, it’s nothing that he did in that prison that would warrant his death. He even looked maybe intimidating to some people, but he wasn’t, he was the sweetest young man,” Rose Palmer says.

Palmer was initially charged with driving under the influence, careless driving and failing to stay in his own lane after he was responsible for a single car crash in October 2016. Even though he was the only one who was harmed, he was left with a long list of fines and fees, and when he failed to appear in court, a warrant was issued for his arrest.

After finding out that he had a warrant, Palmer turned himself into the police on April 7, 2018, and just two days later, he was pronounced dead. The details of what happened over the course of those two days are still disturbingly scarce. Staff at the York County Prison claim that they found Palmer “hitting his heard against his cell door” at 4:20 a.m. on April 9. This is a detail disputed by the family.

“My son was a perfectly healthy young man and my son is not going to bang his head on a cell,” Rose Palmer says.

The prison guards took Palmer to the in-house medical clinic where he was physically restrained for the next hour, and he apparently became unresponsive. He was then moved to the York Hospital where he was pronounced dead at 5:46 a.m.

Now the question remains as to what happened to Palmer between the time he was removed from his cell and the time he took his last breath. While York County Coroner Pam Gay did not say how Palmer was restrained, she did say, “sometimes they have to use physical restraint to render assistance to people … especially if they are self-harming.”

However, at the time, Gay also said that the cause of death in police custody was undetermined—therefore Palmer did not die because he was reportedly hitting his head on the door of his cell, or because he did anything to harm himself.

“That doesn’t mean (the manner) can’t be changed if more evidence (is found),” Gay said. “We definitely have some clear causes for his death; we just don’t know how some of them happened.”

The coroner then claimed Palmer’s death was a result of “complications following an excited state, associated with methamphetamine toxicity, during physical restraint.” Gay said a “high level of methamphetamine” was detected in Palmer’s system.

The claim is notable because Palmer voluntarily turned himself in two days before and he was fine. So if he did have a high level of meth in his system, how did he gain access to it, and when?

What’s more, according to NY1, the family hired a pathologist, who determined Palmer’s death should be labeled a homicide.

Marlon Kirton, an attorney for the family, told the York Dispatch that Palmer’s family is seeking justice and demands to know what caused his death and how staff members at the York County Prison played a role. Kirton also point out the fact that the missing organs suggest a sinister ending to Everett’s life.

“Makes no sense, unless you’re trying to maybe avoid people knowing how he died; which was maybe by asphyxiation,” says Kirton.

Chinese Official ‘We Are Driving America To Its Death”
December 2nd, 2020 The Lid