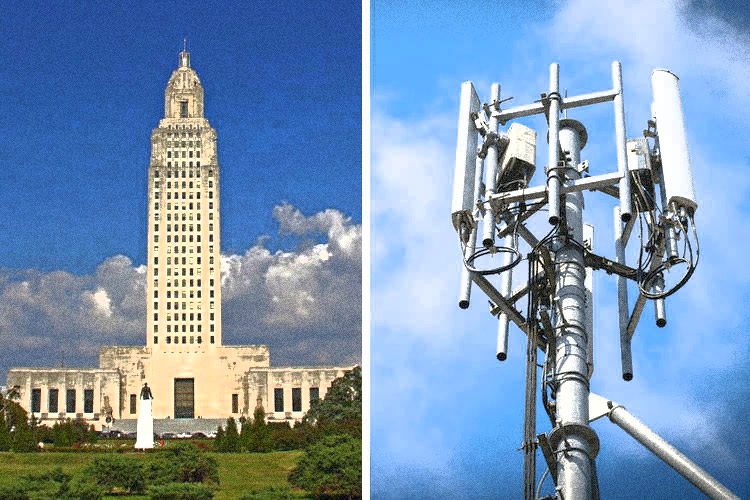 5G—or 5th generation cellular technology—is the name for the latest telecom technology upgrade. The new technology is expected to herald the beginning of Smart Cities, where driverless cars, pollution sensors, cell phones, traffic lights, and thousands of other devices interact in what is known as “The Internet of Things.” However, there have been a number of health and privacy concerns raised by opponents of the rapidly advancing 5G expansion. Louisiana is the first state to call for their own independent study of the technology.

The language of HR 145 outlines the reasons that Louisiana state representatives felt the need to pass such a resolution. For example, the bill states that 5G “may pose risks to the environment due to increased radio-frequency radiation exposure,” and “peer-reviewed studies on this topic show the potential for wide-range effects,” therefore “a study is necessary to examine the advantages and risks associated with 5G technology.” The resolution also notes that “the insurance industry may have placed exclusions in policies to exempt damage caused by this technology,” a reference to reports that various insurance companies have excluded coverage related to damages acquired via electromagnetic frequency radiation.

The resolution also acknowledges that 5G technology requires small cellular towers—or small cells—to be placed every 200 to 500 feet—closer than existing towers—for the network to operate correctly. Not only is the installation of small cell sites taking place across the nation as the U.S. government and telecommunications companies roll out 5G cellular technology, this new infrastructure is being built on top of already existing 3G and 4G technology infrastructure.

Despite the growing concern from state representatives, scientists, health professionals and journalists, the Federal Communications Commission (FCC) has wholeheartedly endorsed the rollout of 5G, claiming that there are no public health concerns. In fact, Louisiana’s HR 145 may end up being challenged in court due to current FCC regulations.

A the Mind Unleashed has previously reported, cities and localities are raising alarm bells due to the federal government and their partners in Big Wireless usurping local control of 5G expansion. The Mayor of Danville, California went so far as to admit that the city council had “lost control” of the 5G rollout to the federal government and Big Wireless.

According to the FCC’s regulations, local governing bodies are not allowed to consider health risks when making their decisions. This is because the federal law known as the Wireless Communications Act of 1996 prohibits local jurisdictions from considering perceived health effects when taking an action on a proposed facility. Instead, cities and towns can only regulate cell sites based on the aesthetics and placement of the devices. This problem was only made worse in September 2018, when the FCC passed a new rule putting the federal government in complete control of the 5G rollout. In April, President Trump issued an executive order stating that local and state bodies must now approve new 5G infrastructure within 90 days. The Trump administration also initiated a cap on the fees local governments can charge telecom companies wanting to install 5G technology.

Even with the Trump administration’s endorsement of 5G, the concerns of the Louisiana House have been echoed by other state representatives and senators. On January 24, Frank Pallone, Chairman of the U.S. House Commerce Committee, accused the FCC of colluding with Big Wireless on the massive 5G rollout. Pallone sent a letter to the FCC asking for copies of communications between the FCC and the corporations involved in the current roll out of 5th generation cellular technology.

Additionally, in early February, the Senate Commerce, Science, and Transportation Committee held a hearing on the future of 5G wireless technology and its impact on the American people and economy. At the hearing, U.S. Senator Richard Blumenthal (D-CT) raised concerns about the lack of scientific research and data on the technology’s potential health risks. In early December 2018, Senator Blumenthal and California Representative Anna Eshoo held a press conference asking the FCC to provide evidence that 5G technology is safe. “To ensure we communicate accurate information to our constituents we respectfully request you provide to our offices the 5G safety determination from FCC and relevant health agencies that you referred to during the field hearing,” Blumenthal wrote.

More recently, New York Congressman Thomas Suozzi sent a letter to the FCC seeking answers about the technology. “Small cell towers are being installed in residential neighborhoods in close proximity to houses throughout my district,” said Rep. Suozzi in his letter. “I have heard instances of these antennae being installed on light poles directly outside the window of a young child’s bedroom. Rightly so, my constituents are worried that should this technology be proven hazardous in the future, the health of their families and value of their properties would be at serious risk.”

New Jersey Congressman Andy Kim also sent a letter, noting that, “Current regulations governing radiofrequency (RF) safety were put in place in 1996 and have not yet been reassessed for newer generation technologies. Despite the close proximity to sensitive areas where these high-band cells will be installed, little research has been conducted to examine 5G safety.” Oregon Representative Peter A. DeFazio, House Transportation and Infrastructure Committee Chairman, wrote a letter to FCC Chairman Ajit Pai and acting FDA Commissioner Sharpless regarding the status of the government’s research into the potential health effects of RF radiation and its relation to the FCC’s guidelines for safe human RF exposure levels.