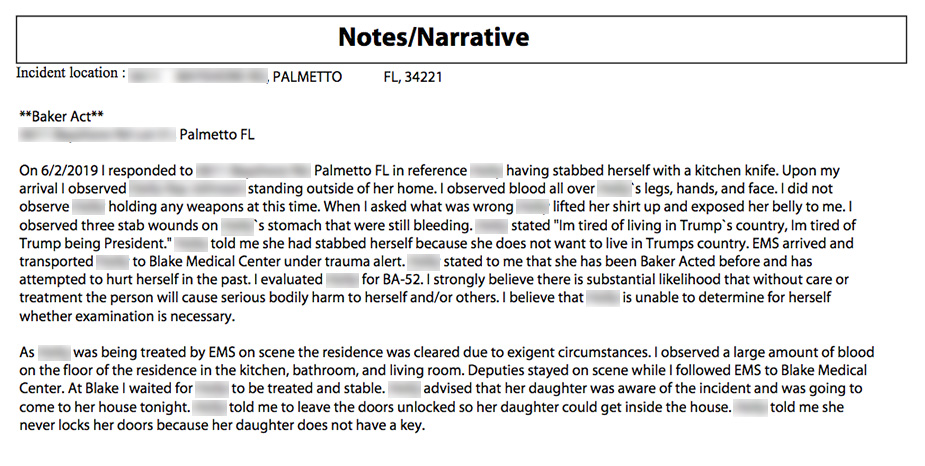 If roles were reversed, and a conservative attempted to kill themselves over Obama or Clinton. the liberals would be out in full celebration mode. Let’s try not to do that.

This is a mentally ill woman, with a history of past suicide attempts.

However, in this case, she was not smart enough to end her own life. Thank God for that.

Some might theorize that she knew she wouldn’t die and was just desperately seeking attention. Who knows?

From The Smoking Gun:

A Florida woman told police that she stabbed herself in the stomach with a kitchen knife because, “I’m tired of living in Trump’s country, I’m tired of Trump being president.”

Cops found the 46-year-old woman standing outside her residence in Palmetto Sunday, according to a police report. She had blood all over her legs, hands, and face, a cop noted.

When asked what was wrong, the woman lifted her shirt to reveal “three stab wounds on [her] stomach that were still bleeding.” She then told the patrolman she had “stabbed herself because she does not want to live in Trump’s country.”

The woman was subsequently transported by EMS workers to a local hospital “under trauma alert.”

After evaluating the woman, a cop concluded that there was a “substantial likelihood” that she “will cause bodily harm to herself and/or others.” As a result, the officer appears to have recommended that the woman be involuntarily admitted to a mental health treatment facility (per the state’s Baker Act).

The report states that the woman said she “has been Baker Acted before and has attempted to hurt herself in the past.”

According to AOL, “The Baker Act is the Florida Mental Health Act of 1971, which allows the involuntary institutionalization and examination of a person. The examination can be requested by a judge, physicians, mental health professionals and law enforcement, so long as there is evidence a person has a possible mental illness and is in danger of harming themselves or others.”

“I strongly believe there is substantial likelihood that without care or treatment the person will cause serious bodily harm to herself and/or others,” the officer wrote in their report. “I believe that [redacted] is unable to determine for herself whether examination is necessary.”

The officer followed EMS to the hospital as other deputies stayed at the scene. The officer waited for the woman to be treated. When the woman was stable, she told the officer that her daughter was aware of the incident and would be at her house that night.

As you can see above, some of the police report has been redacted. Hopefully this woman gets the help she needs and can someday be more in tune with the world around her.

We suffered through 8 long years of Obama, and the left has gone absolutely bonkers just a little over 2 years through Trump’s first term.

I’ve got news for our liberal friends. Many of us didn’t vote for Trump as much as we voted against Hillary Clinton.

Why don’t you find yourselves a decent candidate for 2020 so people might actually elect them and stop trying to kill yourselves with kitchen knives?