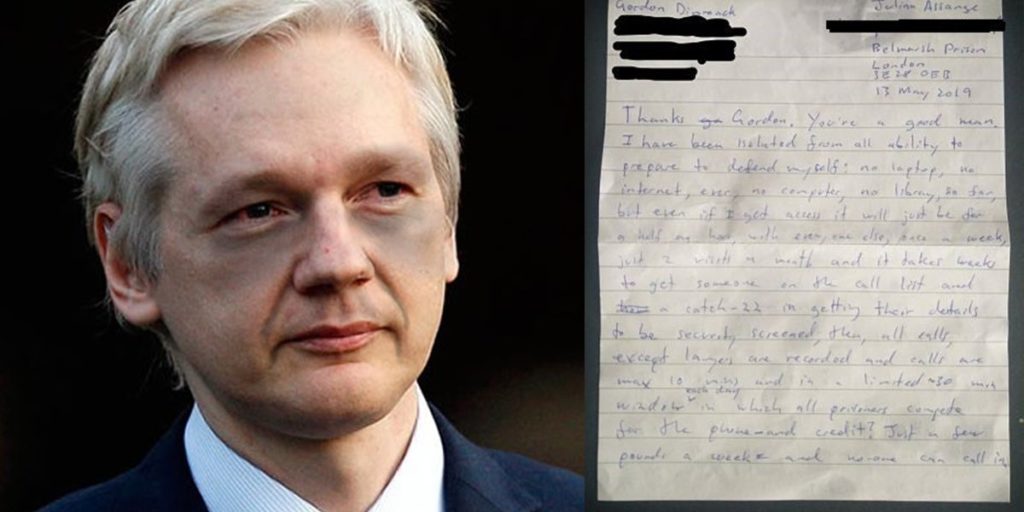 Julian Assange is seriously ill as he awaits extradition for charges that could land him in jail for the rest of his life. According to reports from the Swedish and Danish speaking press last week, Assange is currently being held in the hospital ward of “Belmarsh,” the UK’s most notorious prison. Belmarsh has been called “Britain’s Guantanamo Bay,” since prisoners accused of terrorism are typically sent there.

Amid speculation about the embattled journalist’s health, independent journalist Gordon Dimmack received a letter that was attributed to Assange. Dimmack was one of many people to write Assange since his arrest, but he was nervous about revealing the response to the public because he was unsure if it was authentic.

However, in recent weeks, other supporters who have written to Assange have also received responses, all written in handwriting that bears an extremely close resemblance to that of the WikiLeaks founder, according to The Canary.

In the letter to Dimmack, Assange said:

I have been isolated from all ability to prepare to defend myself: no laptop, no internet, ever, no computer, no library, so far, but even if I get access it will be just for half an hour, with everyone else, once a week. Just two visits a month and it takes weeks to get someone on the call list and a Catch-22 in getting their details to be security screened. Then all calls except lawyers, are recorded and calls are max 10 minutes and in a limited 30-min window each day in which all prisoners compete for the phone. And credit? Just a few pounds a week and no one can call in.

The other side? A superpower that has been preparing for 9 years with hundreds of people and untold millions spent on the case. I am defenseless and am counting on you and others of good character to save my life.

I am unbroken, albeit literally surrounded by murderers, but the days when I could read and speak and organize to defend myself, my ideals, and my people are over until I am free! Everyone else must take my place.

The US government, or rather, those regrettable elements in it that hate truth liberty and justice, want to cheat their way into my extradition and death, rather than letting the public hear the truth, for which I have won the highest awards in journalism and have been nominated 7 times for the Nobel Peace Prize.

Truth, ultimately, is all we have.

Below are images showing the handwritten letters: On May 2nd, 2019, the first hearing regarding Assange’s extradition to the United States was held in London.

When the judge asked Assange if he consented to the extradition, Assange replied, “I do not wish to surrender myself for extradition for doing journalism that has won many, many awards and protected many people”.

On May 23rd, Assange was indicted on 17 new charges under the Espionage Act, which together carry a potential prison sentence of 175 years.

WikiLeaks has grave concerns about the state of health of our publisher, Julian Assange, who has been moved to the health ward of Belmarsh prison. – See full statement: pic.twitter.com/HnZVks4kWj

This week, photos were leaked to the press that showed Assange when he first arrived at the prison. The photos were taken by another prisoner and then somehow smuggled out of the jail.

In the photos, Assange can be seen looking sick, tired and malnourished, but in good spirits as he talked and joked with the other prisoners. However, according to the Gateway Pundit, who published the photographs, they were taken before Assange was admitted to the hospital ward.

The prisoner who leaked the photos to the press says that Assange is well liked among the other prisoners at the facility.

“Everyone’s got a million questions for him. He exposed the biggest scandals in the world. Whose side do you think someone in prison would be on? The government who have us locked up in here or a fellow prisoner who actually doesn’t deserve to be here?” he said.

This article was sourced from Truth Theory.