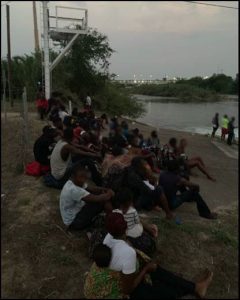 DEL RIO, Tex (INTELLIHUB) — U.S. Customs and Border Patrol agents took 116 African migrants into custody last Thursday that made their way from Angola, Cameroon and Congo, according to a statement posted to the agency’s official website.

The large group of over 100 migrants marks the one hundred and eighty-second large group to have been apprehended in 2019.

“This large group from Africa further demonstrates the complexity and severity of the border security and humanitarian crisis at our Southwest border,” U.S. Customs and Border Patrol Chief Raul Ortiz explained. “Large groups present a unique challenge for the men and women of the Del Rio Sector.”

Our southern border is now a magnet for illegal immigration from all over the world. It’s time for Democrats to help close the loopholes!

Our southern border is now a magnet for illegal immigration from all over the world. It's time for Democrats to help close the loopholes! pic.twitter.com/lxe7qqQiNj

The takeaway from all of this is that African migrants from the Ebola-stricken region of the Democratic Republic of Congo are making their way into the U.S. and to make matters worse ISIS warfighters are now in the Congo.

Not to mention, Ebola deaths have nearly doubled to 2000 in the last 30 days and are expected to compound at such a rate that we may soon see a worldwide outbreak as predicted in various Hollywood films such as Outbreak (1995) and Contagion (2012).

Over 1 million illegals are expected to flood into the U.S. in 2019, according to new numbers.