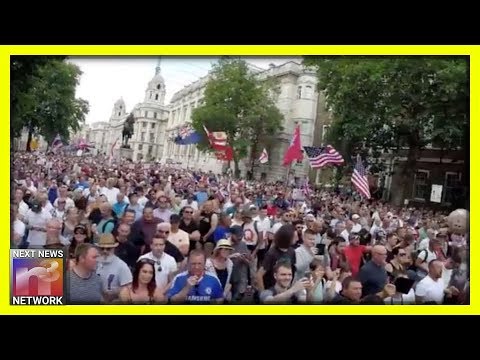 Somewhere between Sadiq Khan’s Trump-blow-up-doll and the video you are about to see lies the truth.

Sometimes we get Right Wing Fake News to go along with the more prevalent Left Wing delusion.

Often we must find our own truth somewhere in the middle.

This is one of those times.

I’ve been trying to figure out what to do with this “fake news” video, because it DID NOT happen exactly as claimed. However, it does serve as proof that Brits DO NOT hate Donald Trump as much as the American Liberal Media claims.

This Next News Network video was published to YouTube on June 7, 2019 and no mentions are made that the video is actually from 11 months earlier. Still, it does prove that Britain is not totally anti-Trump, as American Media would seem to want us to believe.

There is a war being fought for our minds right now and we can not let them win. The liberal media will do anything it can do to destroy conservatism and move us closer to full-blown socialism.

This is an unfortunate fact.

Though Next News Network did not have their facts straight about this particular video, the video is very real and was first published in July of 2018.

Has the UK turned totally against Trump in less than a year?

Or… is the media just selectively showing us what they want us to see?

I think you know the answer to that.

Here is a previous version of the same video footage, published by LiveLeak in July of 2018:

The great Deplorables from the United Kingdom shouting “We Love Trump” at the #FreeTommy march on Whitehall in London on 14 July.

The main stream media won’t show you the numbers in attendance, will mention a ‘few thousand’ when it’s more than 10,000 strong. They also won’t dare share this video, which has gone viral, of our British deplorables in a chorus of “We Love Trump”.

There is a big difference between Tommy Robinson supporters and the people who support the ultimate destruction of the UK, that is now happening, through embracing liberal policies.

But guess who gets more air time these days?

Much like the American Media, the Brits have their own agenda.

Do NOT believe anything and everything you see on mainstream media.

This country needs YOU to be smart, not just another brain dead fool that believes everything you see on Fox News or CNN.

Yes, I did say Fox News. They are tilting more left every single day.

Educate yourself. Things are not as they are telling you and showing you.

LONDON (Reuters) – Thousands of people protested in central London on Tuesday against U.S. President Donald Trump’s pomp-laden state visit to Britain, but numbers were well down on the tens of thousands who gathered to oppose his visit last year.

You’d never know that by watching and reading the stories of American Mainstream Media.

There are people just like you and I in the UK AND they still outnumber the liberals, though the margin may be shrinking.

But you will never see that honestly broadcast or reported anywhere.

The UK DOES NOT hate Donald Trump. Watch the below video and please listen to what Piers Morgan has to say. I never thought I’d see the day when I agreed with Piers Morgan. Please listen carefully because he is questioning the narrative as much as the story itself.

Trump supporters still outnumber those who do not support our President across the pond.

You will not see that broadcast on the mainstream news, but it is the truth.

The media is so full of lies that our margin is slowly shrinking, but conservative thinkers still outnumber lying liberals in the USA and in the UK.