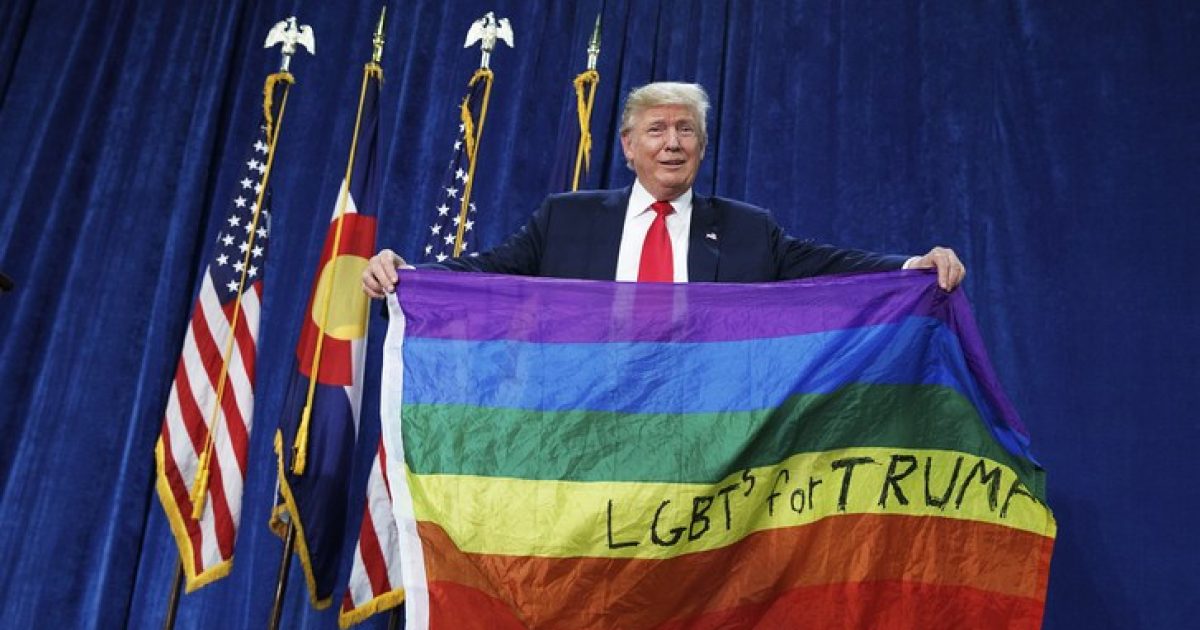 “No enactment of man can be considered law unless it conforms to the law of God.” – Judge William Blackstone

There is no doubt that Donald Trump’s presidency is a clear exhibition of the counterfeit Christianity on a global scale (Matthew 7:21-23), where you will find that these professors falling in line with what Donald says rather than what the Word of God declares.

Remember, this is the same president that said he never had a need to ask for forgiveness yet, Scripture testifies against his narcissistic and self-righteous face.

Today, we see Donald Trump, along with his followers, advocating that which God clearly condemns, attempting to create a world in defiance toward their Creator.

This is not going to end well.

Donald Trump is now on a campaign to decriminalize sodomy and those that are on the Lord’s side (Exodus 32:26) when it comes to enforcing the laws that condemn sodomy-homosexuality. In fact, he even urges the world to follow his lead.

This is happening simultaneously with the “Equality Act,” which is being pushed forward by what your unconstitutional and contrived enemies called the “left” or otherwise known as the “democrats.”

If you remember, Donald Trump’s followers were exposed for their hypocrisies when criminal Barack Hussein Obama’s administration was advocating for what they gave lip service to by condemning concerning the sodomite agenda, but now, these idolaters have given a green light to Donald Trump to do whatever he wills to do.  hypocrites! (Matthew 23:3)

Did you know that sodomy is illegal in every state of our union? In state statutes throughout the United States, they are called “crimes against nature,” directly taken from Scripture (Romans 1:26-32).

I want to lay to your candor a question that must be asked, why does God’s moral law condemn sodomy?

“Thou shalt not lie with mankind, as with womankind: it is abomination.” -Leviticus 18:22

Outside of common sense, if we did not have a father and a mother, none of us would be here today (Genesis 5:2).

Well, let’s look to the fruit (Matthew 7:16) of these sodomites to show you why the Lord condemns these actions (Deuteronomy 25:1).

First of all, the top U.S. serial killers were sodomites.

Jeffery Dahmer was known as the Milwaukee Cannibal or the Milwaukee Monster, who raped, murdered, and dismembered 17 men and boys from 1978 to 1991. Many of his later murders involved necrophilia (sex with the dead), cannibalism, and permanent preservation of body parts. He allured men to his home from sodomite bars.

John Wayne Gacy raped and killed 33 boys in Chicago by playing a clown to allure them in, burying them under his house and in his yard.

Patrick Kearney accounted for 32 murders, cutting his victims into small pieces after sex and leaving them in trash bags along the Los Angeles freeway.

Juan Corona was convicted of murdering 25 migrant workers.  He raped their dead corpses.

A former Big Brother-Big Sisters volunteer was arrested on a complaint of lewd molestation, forcible sodomy, and second degree rape with a boy under 16 years of age.  The pederast, John Gislrer, was a science teacher at Whitney Middle School and the victim was believed to be his little brother.

The Boy Scouts of America claims its child abuse prevention program is the best in the country. However, in 2005, the man that ran that program, Douglas Smith Jr., was sentenced to eight years in a federal prison for trafficking in child pornography on the Internet.

High profile attorney Aaron Biber from Minnesota was sentenced to 18 years in prison for raping his son’s best friend, who was just 15 years old. Police said that he was groomed from 11 years old. Hennepin County district judge Lloyd Zimmerman said that this was one most horrific cases he’s ever seen.

In 2010, former Minneapolis Park Police Captain William Jacobs was charged with sexually abusing a 15-year-old boy from 2007-2009. Prosecutors added child pornography charges to the mix after police found 40,000 pornographic images on hard drives and DVDs in his home. Seventeen more witnesses came forward to testify that Jacobs abused them between 1962 and 1980.

In 2006, the Immigration and Customs Enforcement agency, which conducts Internet pornography investigations, produced a list of 5,200 Pentagon employees suspected of viewing child pornography and asked the Pentagon to review it.  However, the Pentagon checked only about two-thirds of the names, unearthing roughly 300 defense and intelligence employees who allegedly had viewed child pornography on their work or home computers.

The defense investigators failed to check an additional 1,700 names on the list, according to defense officials who revealed the information in correspondence with Senator Charles Grassley, Republican of Iowa.

Downloading child pornography is a federal crime, punishable by prison sentences of five to 20 years.  Yet, members of Congress and other officials say it raises additional concerns when such materials are accessed by employees with high-level security classifications because it leaves them vulnerable to blackmail.

This warning was first sounded to the American people back in 1987 when published by Michael Swift in Gay Community News on February 15-21. Furthermore, it was also inserted into the congressional record.

All the while knowing the fruit of these criminals, why then are the American people allowing this agenda to be pushed forward through their said representatives?

The end aim of this entire agenda is an attempt to normalize pedophilia and sodomy and to criminalize anyone that dares to speak out against their crimes.

Simply put, they mean to rule over you and your posterity with impunity and all of this with the mainstream media and corrupt politicians approval.