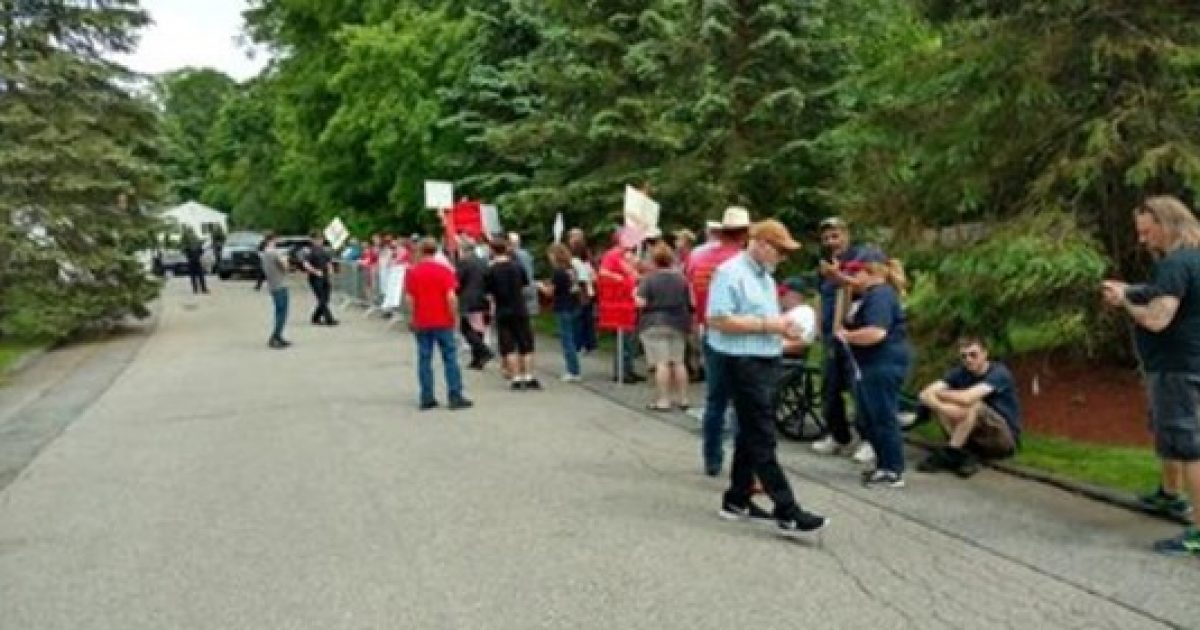 As I wrote back on May 23rd, we made a trip to Hillary Clinton’s home in Chappaqua, New York.  The reaction of folks to our plan ranged from being called foolish to dangerous.  No one messes with the Clinton’s and gets away with it, at least that is what several well-meaning, cowards told us.

How long are we Americans going to continue to live in fear?  As I often replied, if you are worried about the Clinton’s doing you harm then that is all the more reason to go visit them.  What does it say about the state of this nation if we are to fear for our lives simply because we expressed our 1stAmendment right to “petition our government for a redress of grievances.”  We are in the mess we are in because we ARE fearful of the government.

Thomas Jefferson is reported to have eloquently said “When the government fears the people there is liberty.  When the people fear the government there is tyranny.”  Take a look at what is going on in Washington DC with the deep state and it is easy to see that we border on the precipice of tyranny.

Hillary and Bill Clinton worked for us.  We were not their slaves.  As long as government officials are able to treat us as their subjects we will continue to lose our liberties.  If we ever hope to secure our liberties we must once again gain control of those who are elected to SERVE US.  WE THE PEOPLE must stand up and speak up.

A hearty group of about seventy of us traveled from across the nation to demand EQUAL JUSTICE for all.  We went to the heart of mind-numbed liberalism, Chappaqua, where Hillary is adored and honored by a city full of MSNBC trained robots.  We decorated our cars, painted our own signs, and rolled into Hillary’s “safe space” and demanded she be held accountable for the many crimes that she has committed.  It was a Christian trip, not a political one.  We believe EQUAL JUSTICE is not only an AMERICAN standard, but a CHRISTIAN standard as well.

Isn’t it time we called out the two-layered “injustice” system that is an affront to a Holy and righteous God?  Yahweh is no “respecter of persons”.  If His standard of Equal Justice applies to everyone then shouldn’t our government be held to the same standard?  Can liberty ever exist in a system where lady justice puts her thumb on the scale for those who are most “connected?”

We showed up at Hillary’s house on the Sunday before Memorial Day and we called for her indictment.  We spent time on our knees praying for her and for her repentance.  We called on God to deliver swift Justice to her and then to save her soul while she sits in prison.

Harsh, you say?  Really?  Would you be walking free today if you had destroyed evidence in a Federal investigation?  When the IRS comes knocking on your door will they smile and nod when you tell them you destroyed all of the evidence?  Why does Hillary get away with it?  Would you?  Doesn’t that bother you?  Here is a powerful video that shows our gathering outside 15 Old House Lane in Chappaqua.  Notice the police and how respectful they were of our efforts.  No one was arrested.  No one argued with the police.  No one came home in a body bag.  We simply asked the Injustice Department to do their job.

Here is the video.  It is worth a few minutes it takes to watch it.

We went to the Chappaqua parade on Monday.  Bill, Hillary, and Mayor Cuomo all marched in it.  We held our signs and called for her arrest.  They had to walk through a gauntlet of Christian Americans demanding Equal Justice For All.  They couldn’t avoid us.  We covered both sides of the street.   Check out our photo gallery HERE.

As the end of the parade passed by us, we filled in at the end of the marchers.  Those watching the parade thought we were part of the Hillary adulation until the read our signs.  Then their true “love” began to ooze from their pores.  “Go back to Alabama “one of the rich bigots in Chappaqua yelled at out group.  BIGOT is the new N WORD.  Anyone who opposes their point of view is a bigot.  Chappaqua is a city of hate.  They love only those who think like them.

We were just old white boys from Alabama.  Worse yet, we were Christians.  All white Christians need to return to Alabama.  We were somehow less Equal to them…and their Queen Bee, Hillary.

Surprisingly, many “closet conservatives” came by and thanked us for coming.  They said that Chappaqua was the most bigoted city in America and that if you were a conservative you needed to lay low or they would run you out of town.  That’s why Hillary loves Chappaqua so much.  It is her bailiwick.  Tolerance and diversity is nowhere to be found.  Chappaqua needs a little bit of Alabama now and then.

We heard through our sources later that Hillary was livid.  How dare we “rain on her parade!!”  See, she thought that Memorial Day was all about her. We wanted to make sure that she knew it was about Ty Woods, Christopher Stevens, Glenn Doherty, and Sean Smith, the four men she abandoned to die in Benghazi.  “What difference, at this point, does it make?”  It matters to us.  It matters to millions.

We are going back to visit Hillary on July 6th.  We would love for you to join us.  Two systems of justice will never work in a Constitutional Republic.  As my buddy Norm Emmets continued to say in Chappaqua, “What’s good for the goose is good for the gander.”  There can be no justice as long as Hillary Clinton is walking free,

Please make plans to join us on July 6th.  All the info you need can be found at www.EqualJusticeTour.com

Lock her up. Let’s keep the pressure on.