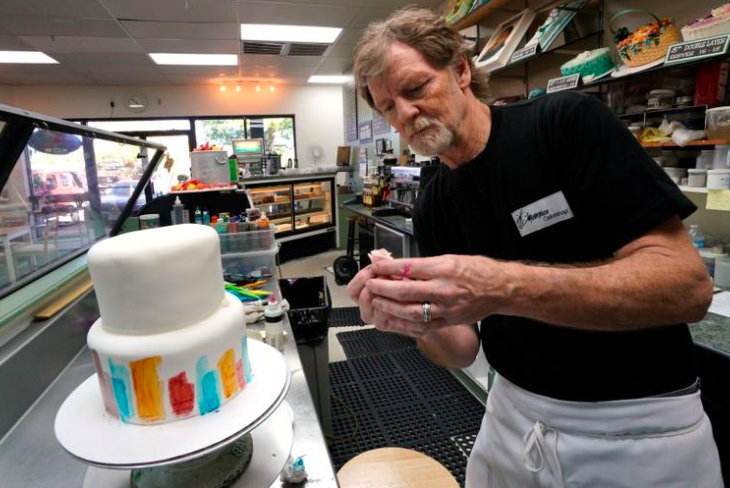 Christian baker Jack Phillips of Colorado is facing a third lawsuit over his refusal on religious grounds to make certain cakes, the latest legal battle for the Masterpiece Cakeshop owner.

Transgender woman Autumn Scardina filed a second lawsuit against Phillips last Wednesday in District Court for the city and county of Denver, Colorado.

In the new lawsuit, Scardina claimed that Phillips violated Colorado’s Anti-Discrimination Act and Consumer Protection Act by refusing to bake what the plaintiff labeled a “birthday cake.”

The “birthday cake” as described in the lawsuit, which was to be blue on the outside and pink on the inside, was supposed to symbolize Scardina’s transition from male to female.

Scardina is being represented by attorneys Paula Greisen and John McHugh. In an interview with local outlet CBS 4, Greisen said that the “dignity of all citizens in our state needs to be honored.”

“Masterpiece Cakeshop said before the Supreme Court they would serve any baked good to members of the LGBTQ community. It was just the religious significance of it being a wedding cake,” claimed Greisen. “We don’t believe they’ve been honest with the public.”

Jim Campbell, senior counsel with the Alliance Defending Freedom, which has represented Phillips in his past litigation, said in a statement that was mere harassment.

“A new lawsuit has been filed against Masterpiece Cakeshop that appears to largely rehash old claims. The State of Colorado abandoned similar ones just a few months ago,” stated Campbell, as reported by CBS.

“So this latest attack by Scardina looks like yet another desperate attempt to harass cake artist Jack Phillips. And it stumbles over the one detail that matters most: Jack serves everyone; he just cannot express all messages through his custom cakes.”

Over the past few years, Phillips and his Masterpiece Cakeshop have been the subject of litigation aimed at forcing the baker to provide services for events that he is opposed to for religious reasons.

The Supreme Court ruled that the Commission violated Phillips’ right to free exercise of religion due to the bias showed in their application of civil rights law.

“To describe a man’s faith as ‘one of the most despicable pieces of rhetoric that people can use’ is to disparage his religion in at least two distinct ways: by describing it as despicable, and also by characterizing it as merely rhetorical—something insubstantial and even insincere,” wrote Justice Anthony Kennedy for the majority.

“This sentiment is inappropriate for a Commission charged with the solemn responsibility of fair and neutral enforcement of Colorado’s anti-discrimination law—a law that protects discrimination on the basis of religion as well as sexual orientation.”

Soon after, Scardina filed a complaint with the Commission against Phillips over his refusal to make a cake celebrating Scarinda’s gender transition. In response, Phillips sued Colorado last August.

In March, Colorado and Phillips both agreed to drop their respective litigation, with Colorado Attorney General Phil Weiser stating that “both sides agreed it was not in anyone’s best interest to move forward with these cases.”

“The larger constitutional issues might well be decided down the road, but these cases will not be the vehicle for resolving them,” said Weiser earlier this year.

“Equal justice for all will continue to be a core value that we will uphold as we enforce our state’s and nation’s civil rights laws.”

The third lawsuit is allowed because the agreement between Colorado and Phillips provided Scardina the right to pursue separate litigation against the Christian baker.