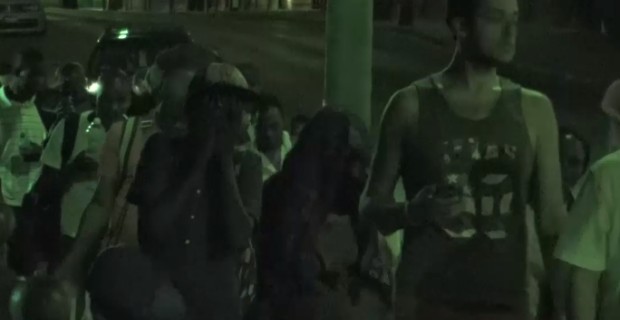 Video footage shows migrants from ebola-stricken Congo being marched through the streets of San Antonio at night as one of their chaperones assaults a cameraman for filming the scene.

The clip shows migrants being led to a nearby church by city workers. Some of the illegal migrants hide their faces while one of the individuals leading the group assaults an Infowars cameraman in an attempt to stop him from filming.

“What country do you think you’re in, man?” asks the cameraman.

As we highlighted yesterday, large groups of migrants from the Democratic Republic of the Congo have been arriving in the U.S. after they initially fled to Brazil. Congo has been hit by one of the biggest ebola outbreaks in history, with 2,000 recorded cases in the last 10 months.

Some cities say they are overwhelmed with the number of migrants arriving and are sending them to other areas of the country.

Border Patrol officials said that 500 people from African countries had been arrested by Border Patrol’s Del Rio Sector in Texas alone in the six days after May 30.

Infowars reporters documenting the processing and transfer of the migrants were assaulted by both city workers and a waitress working at a nearby restaurant simply for covering the story.

The ebola virus can remain dormant within humans for three weeks.

Meanwhile, Dr Michael Ryan, the executive director of the WHO’s health emergencies program, told BBC News that the global spread of deadly diseases is becoming “a new normal” thanks to “large and highly mobile populations”.