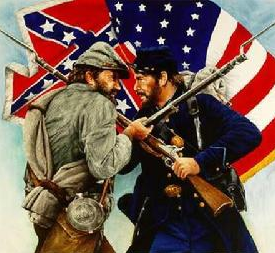 To say that the modern Democrat Party is not the party of John F. Kennedy, Zell Miller and Harry S. Truman is an understatement.  Today’s Democrats — and their far-left allies in Hollywood, the media and in Silicon Valley — seem to have more in common with Josef Stalin than Thomas Jefferson.  Based on their actions since November 2016, one can’t help but think they are deliberately pushing the country to the very brink of a second, bloody civil war.

Think about it for a moment.  Immediately after Trump’s electoral victory, radical leftists took to the streets and engaged in violent protests with hardly a critical word from Democrats.

There were threats to murder the newly-elected president, which included GoFundMe campaigns designed to raise funds for Trump’s assassination.  GoFundMe quickly took the campaigns down after we reported on them, but calls for death and violence continued.

No one is surprised that liberals called for violence and bloodshed — they’ve been doing that on a regular basis for some time, as we and others (like author and columnist Michelle Malkin) have documented.

Democrats like Maxine Waters have even encouraged violence while demanding Trump’s impeachment for essentially defeating Hillary Clinton.  Waters and her allies, like Adam Schiff and Jerrold Nadler, have not only pushed the Russia collusion conspiracy hoax, but are now working overtime to enact what amounts to a coup d’etat against a duly-elected president.

And they’ve shown that they’ll never be deterred by the facts.  If the facts don’t match their narrative, they’ll simply deflect and demand another investigation.  If need be, they’ll bring lying losers like John Dean to testify on matters they know nothing about.

Members of Congress like Waters and Marcia Fudge have also targeted Trump’s supporters, calling them unpatriotic for agreeing with the president.

Meanwhile, Democrats have declared war on the Constitution, and are working to eliminate the Electoral College in an obvious attempt to ensure that only Democrats get elected to the White House.

And it gets worse.  Hollywood crazies like actor Michael Shannon have clearly said they want Trump’s supporters dead.  On practically any given day, we see reports of leftists calling for the eradication of Trump and/or those who support him.  John Cusack, for example, called for Trump to be “eradicated.”  Just recently, we reported on Bette Midler’s call to have the president stabbed with a knife.  Calls for military coups against the President are common.

Then there’s what I now call the “Silicon Valley Axis of Evil,” a cabal of far-left tech companies like Facebook, Google, Twitter and now Pinterest deliberately working to silence anyone whose political views fall to the right of Karl Marx or Josef Stalin.

These are not the actions of people with a simple political difference.  These are people who clearly want to see the destruction of the United States and the death of those with whom they disagree, even if it results in a second bloody civil war.  Debate or discussion is simply not an option as they have no desire to engage in such and would rather ban or silence anyone with a different point of view.

Do these people really want such a conflict?  It certainly seems to be the case.

Although no one in their right minds wants such a conflict, I cannot help but be reminded of the words Captain John Parker spoke to his Minutemen at Lexington Green on April 19, 1775:  “Stand your ground. Don’t fire unless fired upon, but if they mean to have a war let it begin here.”