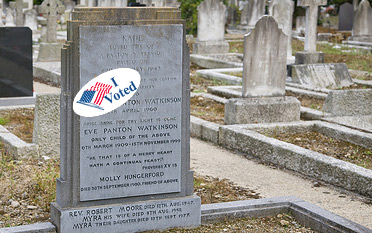 With the Democrats desperately trying to rewrite voting laws to include felons and illegal aliens, I thought it was time someone from our side got a little more rational.

As much as these ideas may be unfair, unconstitutional and simply over-the-top, I feel that they are far less ridiculous than letting inmates and non-Americans vote in our elections.

So here we go…

The predictions about how unauthorized immigrants will vote stem from the fact that among all Latino immigrants who are eligible to vote (i.e. are U.S. citizens) many more identify as Democrats than as Republicans—54% versus 11%. And in the 2012 presidential election, according to the National Election Pool, Latino voters favored Democrat Barack Obama over Republican Mitt Romney by 71%-27%. While Democratic candidates have garnered a greater share of the Hispanic vote than Republican candidates in every election over the past three decades, the gap has been narrower in some elections than others. For example, in the 2004 election the gap among Hispanic votes between John Kerry and George W. Bush was only 18 percentage points (58% vs. 40%), compared with the 44 percentage point gap in the 2012 election. -Source: PEW RESEARCH

Most illegals are going to vote Democrat, which is why the Democrats are pushing for their right to vote and also standing against Trump’s Wall. So let’s let legal citizens have an extra vote to balance out the unconstitutional voters that Democrats, in some cases are already, or trying to, give voting rights to.

Since Democrats are Slowly but Surely Giving Voting Rights to Felons, Gun Owners Should Get an Extra Vote:

This may not bode well for Democrats, but if felons are going to vote, then the guys and gals who legally carry their firearms should get an extra vote:

As you can clearly see, a lot more Republicans and Independents would be gaining an extra vote than Dems. (Republicans are the left column, Dems middle, Independents right AND the light blue bar shows how many own guns).

Gun ownership is a tradition that resulted in American colonists telling (and showing) our oppressors where to stick it AND that day may come again (maybe sooner than we’d like).

Based on merit, gun owners deserve an extra vote.

Those Who are Living Should Get an Extra Vote to Balance out DEAD Democrat Voters:

“A new report by the Pew Center on the States finds that more than 1.8 million dead people are currently registered to vote.” –Pew Center Study, Courtesy of NPR

Dead people are voting in this country, especially in Democrat controlled districts. Those who are living should get an extra vote to help lessen the impact of these ineligible voters.

Since Business Owners Provide Jobs, They Should Get an Extra Vote

Small-business owners are politically split, yet continue to lean Republican, according to a new survey.

If you provide jobs to other people, you should get an extra vote. Even small businesses with no employees free up a job for someone else, because they no longer require that job for themselves. Let’s reward that.

If you have a job, you should get an extra vote

I, for one, am tired of the incessant whining from people who contribute nothing. I understand that people can fall on hard times, but those who have jobs should be given an extra vote.

The states with the lowest unemployment rates tend to have populations that identify as Republican, according to federal data released Friday.

The Bureau of Labor Statistics (BLS) looks at unemployment in each state on a monthly basis. Most of the states with the lowest unemployment rates have populations that identify as Republican. American Enterprise Institute Scholar Mark Perry notes it’s likely due to those states pursuing more business-friendly policies.

We will take our chances on most of those unemployed people being lazy Democrats. If not, then good for them.

By all means, give people who have a job an extra vote. These are the people who drive this country, not those who seek handouts.

Shouldn’t Military Get an Extra Vote, Since They Defend Our Country?

From Time Magazine: But the U.S. military plainly tilts toward the GOP. That’s largely because today’s military is an all-volunteer force increasingly drawn from the Sunbelt, where the Pentagon has focused its recruiting efforts since the draft ended 40 years ago. And traits the military prizes — like aggressiveness and respect for authority — tend to be more pronounced in conservatives.

Shouldn’t those who are willing to die for this country be giving a little extra say in how it’s run? I’d even argue that Officers (who are largely Republican) might deserve an extra vote over the enlisted (who mildly lean Democrat) to honor their commitment and service time.

Instead of Importing More Illegals, We Should Give Those Who Bear Children an Extra Vote

Fatherly.com reports that Liberals aren’t doing a very good job at replenishing our population. Shame on them. Have some babies and focus on family instead of perversion.

Liberals are not having enough babies to keep up with conservatives. Arthur Brooks, a social scientist at Syracuse University, was the first to point this out all the way back in 2006 when he went on ABC News and blew blue staters minds. “The political Right is having a lot more kids than the political Left,” he explained. “The gap is actually 41 percent.” Data on the U.S. birth rate from the General Social Survey confirms this trend—a random sample of 100 conservative adults will raise 208 children, while 100 liberal adults will raise a mere 147 kids. That’s a massive gap.

Similar to Military, Shouldn’t Cops and Firefighters Get an Extra Vote for Protecting Us?

Cops and Firefighters tend to vote Republican. Why? I don’t know but I found a really good answer on Reddit:

ELI5: Why do most public servants (ie Police and Firefighters) vote republican?

I have relatives that are cops and firefights and they are all republican as are their colleagues. I know it’s a generalization but whatever. They are paid by taxes and are all apart of a union (something that’s very anti conservative/republican doctrine). Yet in my experience they are all staunchly republican.

EMT here. I think its partially because public safety sees a lot of folks who are major abusers of government assistance and disagree with it in a lot of ways and thus disagreeing with many liberal ideals.

For the record I don’t consider myself a democrat or republican.

Are liberals abusing the system?

I had no idea.

Maybe conservatives should get an extra vote over liberals, but that’s a whole other article.

The bottom line is that those who do the most for this country are being overshadowed, and may soon be outvoted, by those who contribute little or nothing.

Well, that’s not quite fair because they do contribute a more than fair amount of bitching.