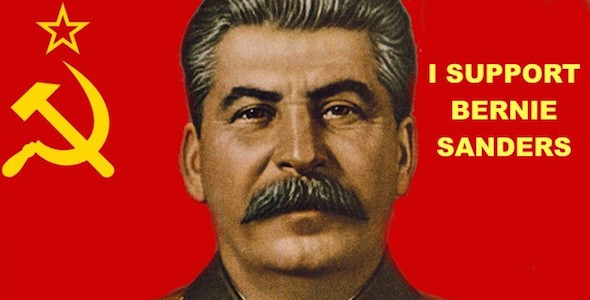 Bernie Sanders, as many of his Democrat colleagues, admits to being “socialist” but don’t you dare call him a communist.

Is Bernie Sanders a Communist?

Consider the opinion of our President and this brief excerpt from a 2016 article by Joseph Farrah at WND:

Donald Trump has called Bernie Sanders a “communist” and a “maniac.”

But before I make the case that he is, consider that in my misguided youth, I would have described myself as a “communist.” I traveled in many of the same circles as the young Bernie Sanders – Students for a Democratic Society, anti-Vietnam War protests, various Marxist organizations.

I stopped calling myself a socialist and a communist a long time ago. But Bernie has never given up the utopian dream.

It was spelled out in the preamble to its constitution: “The Young People’s Socialist League of America calls upon all young people who are interested in the emancipation of the working class from the chains of wage slavery to join its rank and through it and its associated organizations of the International Socialist Movement, to work for the overthrow of the present capitalist system in all its social and economic ramiﬁcations, and for the establishment in its stead of a worldwide socialistic cooperative commonwealth.”

Today Sanders still calls himself a socialist, but he says don’t worry – “I don’t believe the government should take over the grocery store down the street or the means of production.” I guess the next question one should ask a socialist is, “Why not?”

Has Sanders’ definition of socialism changed since he was a member of the Young People’s Socialist League that called for a complete overthrow of the capitalist system to be replaced by “a worldwide socialistic cooperative commonwealth”?

Socialism is the breeding grounds for full-blown communism.

If Bernie Sanders, or any of his socialist cohorts, gains The White House, WATCH OUT!

The latest clue that Bernie Sanders is really a “communist in socialist garb” comes from Elizabeth Vaughn at Red State:

Sanders understands that many Americans view the term “socialist” as a “slur” and sought the opportunity to clear up some of the myths and allow us to see how great socialism really can be.

Finally, Sanders introduces the centerpiece of his platform, which he calls “a 21st Century Economic Bill of Rights.”

However, there’s something deeply disturbing about Sanders’ proposal. In an appearance on Hannity, political commentator and historian Mark Levin points out that Sanders has “stolen his agenda from the 1936 Soviet Constitution.”

Here is an excerpt from Sanders’ speech:

A Bill of Rights that establishes once and for all that every American, regardless of his or her income in entitled to:

These six “rights,” which define Sanders’ platform, are indistinguishable from the rights identified in the 1936 Soviet Constitution, which is also known as the Stalin Constitution.

ARTICLE 118. Citizens of the U.S.S.R. have the right to work, that is, are guaranteed the right to employment and payment for their work in accordance with its quantity and quality.

ARTICLE 119. Citizens of the U.S.S.R. have the right to rest and leisure. The right to rest and leisure is ensured by the reduction of the working day to seven hours for the overwhelming majority of the workers, the institution of annual vacations with full pay for workers and employees and the provision of a wide network of sanatoria, rest homes and clubs for the accommodation of the working people.

ARTICLE 120. Citizens of the U.S.S.R. have the right to maintenance in old age and also in case of sickness or loss of capacity to work. This right is ensured by the extensive development of social insurance of workers and employees at state expense, free medical service for the working people and the provision of a wide network of health resorts for the use of the working people.

ARTICLE 121. Citizens of the U.S.S.R. have the right to education.This right is ensured by universal, compulsory elementary education; by education, including higher education, being free of charge; by the system of state stipends for the overwhelming majority of students in the universities and colleges; by instruction in schools being conducted in the native language, and by the organization in the factories, state farms, machine and tractor stations and collective farms of free vocational, technical and agronomic training for the working people.

ARTICLE 122. Women in the U.S.S.R. are accorded equal rights with men in all spheres of economic, state, cultural, social and political life. The possibility of exercising these rights is ensured to women by granting them an equal right with men to work, payment for work, rest and leisure, social insurance and education, and by state protection of the interests of mother and child, prematernity and maternity leave with full pay, and the provision of a wide network of maternity homes, nurseries and kindergartens.

The only “right” not stolen from the Stalin Constitution was the right to a clean environment. Climate change, obviously, was not an issue in 1936.

I was worried that Bernie had morphed into a full-fledged communist.

To “Feel the Bern” means that you will be smelling all that is still good in America burning all around you.

Don’t be one of those trendy-bandwagon-socialist-idiots.

You are being played if you are, because the goal of socialism is always communism.

If you want communism get the hell out of America, because we will die before we come under communist rule and my trigger finger is not picky.