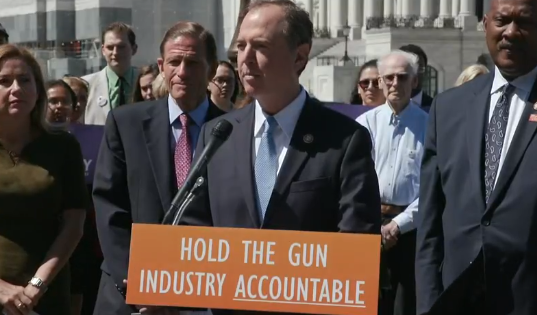 Democratic lawmakers introduced legislation last Tuesday to end what they refer to as “special legal protections for the gun industry” and allow victims of gun violence to sue manufacturers.

Rep. Adam Schiff (D-Calif.) and Sen. Richard Blumenthal (D-Conn.) reintroduced the Equal Access to Justice for Victims of Gun Violence Act. The bill is meant to ensure that gun manufacturers, sellers and trade groups are not immune to civil liability in cases of alleged negligence.

“The gun industry should not enjoy special privileges and protections, especially while our nation is plagued by an epidemic of mass shootings and everyday gun violence, ” Schiff said in a Tuesday statement. “This bill would pierce the gun industry’s liability shield by putting an end to the special protections the gun industry receives when they shirk their fundamental responsibility to act with reasonable care for the public safety. Victims of gun violence deserve their day in court.”

Victims of gun violence deserve their day in court.

Watch as @SenBlumenthal and I, alongside activists with @MomsDemand, @NewtownAction, @bradybuzz & @GiffordsCourage, introduce legislation to hold the gun industry accountable: https://t.co/qmPp8mH9XF

The bill would repeal the Protection of Lawful Commerce in Arms Act (PLCAA), which Congress passed in 2005. PLCAA provides immunity for licensed firearm manufacturers, distributors, dealers and trade groups from most civil lawsuits in state and federal court when a firearm is used unlawfully.

“Under state and federal law, we require and expect every other industry ― whether car makers or drug companies ― to act with reasonable care for public safety. But in 2005, after furious lobbying by the [National Rifle Association], Congress passed PLCAA to create a special carve-out for the gun industry,” Schiff said in a news conference, surrounded by members of gun violence prevention groups, including Moms Demand Action, March for Our Lives and Giffords. “Responsible actors in the gun industry don’t need this limitation on liability, and the irresponsible ones don’t deserve it.”

The problem with this assertion is that car makers or drug companies are only held responsible when their product fails, not when someone uses it unlawfully.

In addition to repealing PLCAA, the bill would allow those filing civil lawsuits in state and federal courts to subpoena and introduce relevant gun trace data maintained by the Bureau of Alcohol, Tobacco, Firearms and Explosives. Currently, a provision in the Commerce-Justice-Science appropriations bill blocks the discovery and introduction into evidence of the ATF’s gun trace data as part of civil proceedings, but co-sponsors of Tuesday’s bill said such data can help establish a pattern of negligent behavior by the firearm’s manufacturer or dealer.

Schiff initially introduced the measure to repeal PLCAA in 2013. The bill has been reintroduced without success at least two other times, and Democrats know if the bill passes in the House, it will have a tough time in the Republican-controlled Senate, which does not appear eager to undo existing legislation. But the reintroduction in an election year is an important political tool for them.

Lawrence Keane of the National Shooting Sports Foundation, a firearms trade association, told NPR his organization “will certainly oppose this legislation.” He called the bill to repeal PLCAA “fundamentally unfair.”

“You would no more charge or blame Ford or General Motors for drunk driving accidents,” Keane said, adding that the current law is “working exactly how Congress intended it.”

Keane and other supporters of the current law say it was passed as a way to ensure that manufacturers, dealers and distributors had protections from what they call “frivolous” lawsuits intended to bankrupt the gun industry.