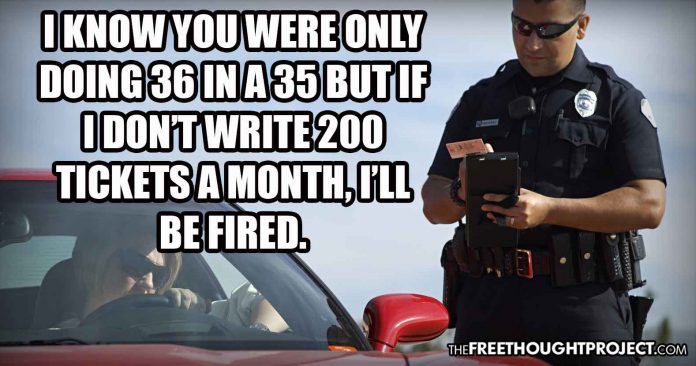 Ridgetop, TN — The town of Ridgetop, Tenn. made a rather substantial move this week in an attempt to save money, so they dissolved the entire police department. The decision to fire all the cops happened on Monday night, and yet the town has not yet descended into utter chaos. Imagine that.

The decision to dissolve the department happened Monday during a special-called meeting to decide how to save money after controversy arose about writing tickets.

“It was all budget,” said Ridgetop Mayor Tony Reasoner. “We can’t afford it. Hopefully, and I’m going to float this idea with the board, but I think we need a 4-5 member board of citizens to come up with ideas on our future. Do we need a full-time or a part-time police department, or do we let the sheriff … cover it?”

According to the Tennessean:

THE RIDGETOP POLICE DEPARTMENT HAD A BUDGET OF $429,000, SAID REASONER, WHO ALSO SERVES AS THE CITY’S FIRE CHIEF. HE’S BEEN WITH THE CITY SINCE 1989.

THE POLICE BUDGET INCLUDED REVENUES OF $258,000, MOSTLY FROM TICKET WRITING, BUT REASONER SAID THAT FIGURE HAD BEEN STEADY SINCE 2006, WHEN IT JUMPED UP FROM $120,000.

“THE DEPARTMENT WROTE SIX TICKETS IN MAY, BUT THE CHIEF (BRYAN MORRIS) KEPT SAYING HE COULD KEEP A FULLY-STAFFED FORCE FOR $289,000,” REASONER SAID. “WE TOLD HIM WE HAD $129,000 IN THE BUDGET BECAUSE WE COULDN’T COUNT REVENUES FROM TICKETS.

“WE NEVER HEARD ANYTHING ELSE.”

Showing exactly how this corrupt system functions is the fact that, according to a secret recording, city officials were apparently unhappy that the department wasn’t writing enough tickets.

Clearly proving the point that they care not about the ostensible safety of their citizens — and instead only money — the council voted to fire the entire department.

According to the former police chief of Ridgetown, he asked to hire a new police officer earlier this year and he was told by council members that he would need to write more tickets to pay for it.

Morris actually released the secret recording on his own after he caught city leaders demanding a quota.

“They told me: you will write 210 tickets or we will take the position away,” Morris said.

Although the city disputes this claim by Morris, the chief’s recording, released back in January, does not lie.

“I will make a proposal right now. I will give the two bottom guys a raise for the 12-month period and hire back the seventh officer if you write an average of 210 tickets a month. I will do that, but I better see 210 tickets a month,” said Vice Mayor McCaw Johnson.

This move to get rid of the police department is unlike other moves we’ve seen where the officers are corrupt and therefore all fired. This time, the example shows what happens in towns across the country who are strapped for revenue.

City officials want more money to justify their bureaucratic budgets so they lean on cops to extort the citizens through traffic fines. We have seen this play out time and again.

These local governments have long advocated for police departments to prey on poor people to finance themselves. However, this time, it appeared that this department didn’t want to do that—so they were fired.

“Law enforcement is not about tickets. It’s about trying to cut down on crime. That is a local government taking advantage of its people. That’s not what we are here for,” said officer Shawn Taylor, who conducted the secret recording of officials demanding a quota.

“For a city this size and the budget we have, the tickets we are writing is out of hand,” chief Morris said.

Indeed it was. Showing just how out of hand it was are some local stats from a study done by FOX17, who looked at ticket revenue in other towns.

When the police department realized the city officials only wanted them for revenue collection, the controversy began—and now we are seeing where it ends.

Sadly, this is the same situation in governments across the country. While we are told quota systems are illegal, the government needs to write tickets to fund itself. It relies on extorting citizens for victimless crimes in order to sustain the constant promotions and expansion. When cops try to challenge it, as this case illustrates, they are removed.