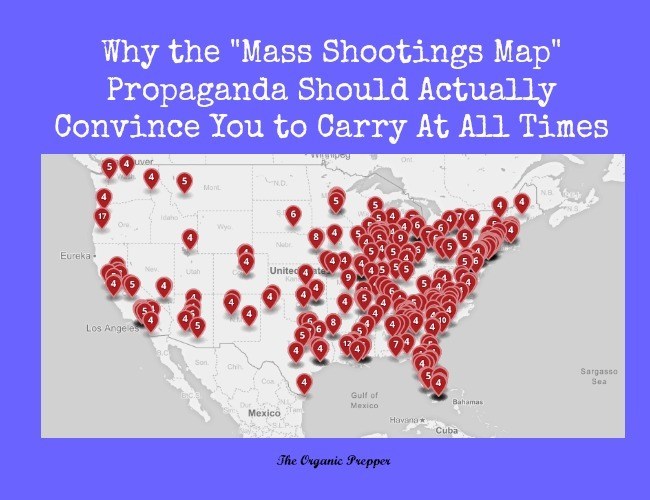 Editor: FACT — There were 162 mass shootings during Obama’s presidency. Whether that was planned, a matter of policy, or simply a matter of crazy mass shooters springing up all over matters not. You need to be prepared to defend yourself and your loved ones at all costs and at all times. You need to be ready to kill in order to protect what is yours. The 2nd Amendment can not and will not be compromised. Ever!

If you use any form of social media whatsoever, you’ve probably seen the scary “mass shootings map” published by PBS, leading people to believe that they live in a terrifying place and that strict gun control is the only answer. You’ve probably read some of the cries for gun control and the stat of “more than one mass shooting a day” happening in the US. To see this propaganda, you’d think that people walk around with Uzis, randomly opening fire all the time. You’ve probably had this map indignantly posted at you in response to something you said about guns on social media.

But, you see, the map is BS. It’s a big old truckload of baloney sandwiches, steaming in the sun. It’s a manipulation that is being used to frighten people into thinking they’d be safer if none of us had the tools that we need to protect ourselves.

These terrifying dots are not all brazen shoot-outs in malls or movie theaters, during which someone takes out as many people as they can. But that’s how it’s portrayed. It’s posted without any real criteria except for the fact that it is incidents in which 4 or more people are shot, including the initial perpetrator. (A reader pointed out that these dots indicate shootings, not deaths in every case. This reduces  the dramatic effect of the map even more.)

Since biblical times, murders of groups have been recorded. I’m obviously not saying it’s okay, by any stretch of the imagination, but I’m saying that acting like this is a new thing fueled by ammo this is a blatant misrepresentation, designed to scare people into begging the government for protection.

But why would responsible gun owners being disarmed make anyone safer?

I know it has been said so many times that it’s become a cliche, but when law-abiding people give up their guns, who do you think will have guns? We’ll have another horrifying incident and no one…NO ONE… will be prepared to stop it.

There are many vital stats missing. Here are just a few of the questions you should ask yourself when you look at that ridiculous mass shooting map.

If anything, this map should make you more convinced of the importance of carrying a firearm everywhere you go. You have an inalienable right as a human being to preserve your own life.

This is a scare tactic for non-critical thinkers

It’s full of holes. It’s a scare tactic, meant to frighten those who won’t think more deeply about the issue. It’s for people who read the headlines, but not the articles.

The map was published by PBS, who is sponsored in part by Pew Charitable Trust. While the map makes it look like gun violence is on the uptick, Pew reported in a recent article that it actually dropped in half a decade ago, and has remained steady since.

Several mass shootings this year have brought renewed attention to the issue of gun violence in America, and President Obama has again called for Congress to change the nation’s gun laws.

But the increased spotlight on guns does not reflect the overall gun violence trend in the country. Although most Americans think the number of gun crimes has risen, the U.S. gun homicide rate has actually stabilized somewhat in recent years, according to a Pew Research Center analysis of death certificate data collected by the Centers for Disease Control and Prevention.

And speaking of Obama, there was a dramatic increase in “mass shootings” since he took office. And by dramatic, I mean it will blow your ever-loving-mind when you see the numbers.

Truthstream Media collected the following statistics on mass shootings since the Reagan administration. I knew it was bad under Obama, but wowza. Seeing it in print like this certainly shows that increased gun control isn’t slowing down the criminals one little bit.

When all incidents where four or more people were shot in a single event are broken out by president going back to Reagan (considering the database only stretches back to 1982), there just so happens to have been a startling increase in mass shootings since Obama, the most pro-gun control president America has had in modern history, took office.

(You can download the full list of names, dates, locations, and numbers of deaths per mass shooting by president prepared for this article here.)

This article was originally written before Donald Trump became president, but as of 2018, there were 4 mass shootings under his watch. President Obama finished off with 24 mass shooting events.

I like a good conspiracy as much as the next prepper, even though I take a lot of them with a grain of salt. But ONE HUNDRED SIXTY TWO????????????

So no, this doesn’t make me want gun control.

Coincidentally, the day of one recent shooting, I had just written an article explaining why I felt it was vital that preppers be armed. The day before the Pulse night club shooting, I used a gun to protect my family. These incidents did nothing to change my mind. In fact, they solidified my stance even more.

Gun control does not keep you safer, which is a lesson we learned with the 2015 atrocity in Paris. No one had a firearm with which they could fight back.  They hid. And when hiding didn’t work, they were slaughtered. They were as helpless as a newborn kitten with its eyes closed. They were victims and weren’t even allowed a fighting chance to level the playing field.

It’s maps like these that make me more determined than ever to exercise my 2nd Amendment right and protect my family, wherever we go.

In fact, I think I’ll go throw a couple of extra magazines in my purse.

This article has been updated since was originally published Dec. 3, 2015.