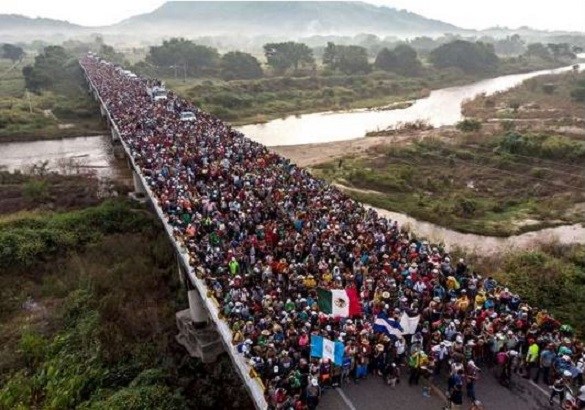 These migrants are not really as helpless as the Fake News Media would have you believe.

In fact, migrants from these 3 particular countries are very dangerous.

Please read my 2014 article in full, as it is pasted below.

Nothing you read, hear, or see from the corrupt Fake News media is quite as they report it.

What Obama Doesn’t Want You to Know About Immigrants from Honduras, El Salvador and Guatemala

Yesterday I reported that an illegal immigrant from Honduras entered the country on June 26th and three weeks later had already been charged with 2nd Degree Murder. Pedro Alberto Monterroso-Navas entered the country with two children and was allowed to stay under Obama’s “catch and release” amnesty policies.

Not many people read the article, likely because I was about 12 hours behind the bigger media sources which reported it and we get significantly less traffic to begin with. [Oh the joys of being a small potatoes blogger!] However, there was some very important research in that article and I would like to share it again:

Honduras has the highest homicide rate in the world at 90.4 per 100,000 population according to a United Nations report. That rate is roughly 5 times higher than Chicago which recorded an 18.5 per 100,000 homicide rate as recently as 2012. Coincidentally El Salvador is ranked 4th and Guatemala is 5th on the list of countries with the most homicides per 100,000.

We are taking “refugees” from 3 of the top 5 murderous countries in the world and the hypocritical leftists dare to offer their wild theories of how gun control will reduce violence at home.

Think about the people we are letting in to this country. They come from a culture of violence and they will ultimately bring more violence. We saw evidence of that with Monterroso-Navas and he will not likely be an isolated case.

There has been a lot of talk about Mexican Drug Cartels and Islamic Terrorists entering through our Southern Border, but that is not the entire scope of our worries. Chicago is in the news on a daily basis for violent gun murders and yet we are letting people into this country that come from a culture that is 500% more violent than Chicago.

Do you think they can flip a magical switch when they get here and change overnight? These people come from urban war zones. You can take the immigrant out of Honduras but you can’t take Honduras out of the immigrant.

Do you think this might have been planned? The government knows full well that we are letting in more than just children. The story of the children is meant to pull at America’s heartstrings.

Is this part of the strategy that Obama is using to intentionally destroy America?

It is blatantly obvious that this was all intentional.

Here is the list of the most murderous countries in the world. The murder rates to the right are the number of homicides per 100,000 population. Only 41% of these murders are the result of gun violence which proves once again that bad people will always find ways to kill:

Notice that we are not currently in the top ten. But if Obama and his pals, who planned this immigration crisis, have their way we will be climbing up the ranks in the very near future.

It is not only children coming to America and we certainly can not assume that it is only innocent ADULTS either.

America has a major problem.

Trump knows how dangerous these people are and he knows they do not all come with good intentions.

Those who want to defend our border are not bigots.

They simply wish to keep America on a solid path that will produce a solid future for all of us.

It’s hard to do that with a bunch of murderers, terrorists and drug dealers pouring across our Southern Border.