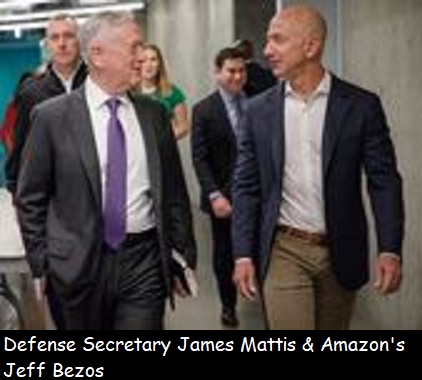 James Mattis, 68, former U.S. Marine Corps general who was widely revered by rank-and-file Marines for his blunt talk and leadership, was recruited by President Trump into his administration as Secretary of Defense, to the roaring approval of conservatives and patriots.

Mattis was defense secretary for only two years, from January 20, 2017 to December 31, 2018, after resigning reportedly over disagreement on Trump’s announcement of an immediate U.S. withdrawal from Syria. A day after Mattis’ departure, on January 2, 2019, Trump criticized Mattis’ performance as Secretary of Defense and said he had “essentially fired him.”

My post of May 24, 2019 was on what may be the real reason why Mattis resigned or was fired: At least seven months before he resigned, Mattis had put together a plan to challenge Trump in the 2020 Republican primary elections.

Now, we are told by FoxNews’ Tucker Carlson that, in addition to being disloyal, Mattis is also corrupt. As defense secretary, Mattis made a secret, no-bid $10 billion Pentagon contract with Amazon.com.

“The Department of Defense exists to protect America from foreign threats and does a great job of that, thank God, but it’s also a massive consumer of tax dollars — the biggest, really. And for that reason, concerns about corruption are always there.

There’s reason to believe that over the past couple of years, some at the Pentagon had worked to enrich Amazon, already the world’s richest company. In 2017, the Pentagon announced a $10 billion cloud-computing contract. According to critics, the contract wasn’t actually competitive and was designed from the very start to be fulfilled by Amazon and only by Amazon. Several of Defense Secretary Jim Mattis’ aides had prior professional ties to Amazon. A key official working on the Pentagon’s cloud computing program was carrying out secret job negotiations with Amazon even as he worked on the Pentagon’s program.

And we can report exclusively tonight on this program that in March 2017, before the cloud computing contract was announced, [Defense] Secretary Mattis had a secret dinner in London with Amazon’s top cloud sales executive Teresa Carlson.”

Tuckson Carlson then interviewed Congressman Mark Meadows (R-NC), the chair of the conservative Freedom Caucus and considered one of President Trump’s closest allies in Congress. What they said: