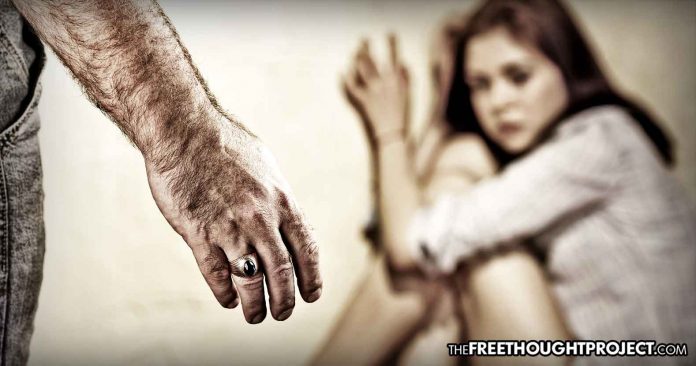 Imagine being raped repeatedly since you were a small child, eventually hitting puberty which allowed the rapist to then impregnate you. Imagine you then keep these children and raising them as your own after escaping your rapist. Then imagine that this monster wants to see the children that are products of his rape. Then imagine the state not only allows it, but forces you to allow him to see the kids or face jail. Sounds like a nightmare, right? Well, for a rape survivor in Alabama, it’s her reality.

Jessica, whose last name will not be mentioned to protect the identity of her children, says Alabama’s laws have forced her to face the man who raped her repeatedly since she was a child.

According to Jessica, she was repeatedly raped as a child by her mother’s half-brother, for years.

“Well, it all started when I was 12 or 13 years old, and he started climbing in my bed at night,” she told KVOE.

Sadly, because many police departments are more interested in busting people for marijuana than they are in arresting rapists, Jessica’s abuser was never convicted. This was in spite of DNA evidence that proved her claims.

The rapes were so frequent, that starting from the time she could have children, she did. At just 14-years-old, Jessica became pregnant and miscarried. Then, at 16, she had her first baby boy.

At 18, she had another baby, who died shortly after birth from a disease that is common among cases of incest. At 19, she had her youngest son.

Jessica is now 32 and she is forced to face her abuser regularly and allow him to see her children.

“I literally just felt like I didn’t have any options,” she said. In another interview, Jessica told The Washington Post she was forced by her family to marry her rapist. That marriage was later deemed illegal by a court due to a “familial relationship.”

Recently, according to the report, Jessica says her rapist has been taking her to court and suing for his visitation rights—and winning. Jessica is now speaking out because she wants this depraved and failing system to change. We agree.

“You have to stand behind what’s right, and you have to stand up for what you believe in. You know, it’s been a very long, hard road for me. But it’s going to be worth it. It may not benefit my case, but somebody in the future will benefit from this,” she said.

Adding insult to child rape is the fact that the court said if Jessica refuses to allow the man who raped her as a child to see the children, she will be jailed for 48 hours for each instance.

“We are one of two states in the Union that do not have a law that terminates the rights of a rapist,” said Rep. Juandalynn Givan (D) Jefferson County.

Givan told KNOE that her fellow lawmakers are wasting time passing senseless bills instead of helping women like Jessica.

“I think the legislature is failing the women of Alabama. The justice system can do no more than what we enact into law,” she said.

Currently there are no bills on the ballot that are designed to remove parental rights from rapists—even those who rape and impregnate children.

Last month, the state Legislature considered a bill that would have ended parental rights where the conception is the result of rape, but lawmakers removed the requisite language, instead choosing to limit the law to cases in which children are sexually assaulted by a parent, according to the Journal Gazette.

And this is the system we think protects us.