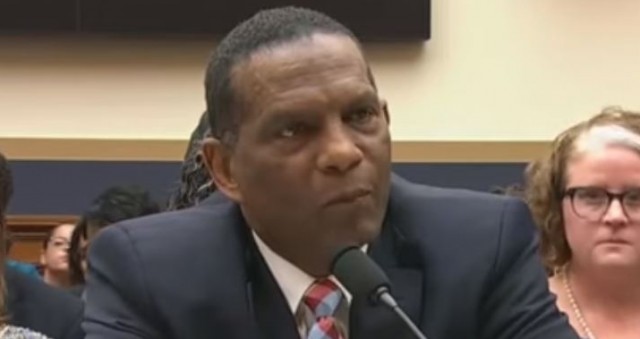 The National Football League legend, who has been a vocal commentator on politics, appeared at the House hearing on reparations on Tuesday.

And while people like Sen. Cory Booker used it to score points, pander and demand we pay them, Owens placed the blame where it lies.

“I used to be a Democrat until I did my history and found out the misery that that party brought to my race,” he said.

“I do believe in restitution. Let’s point to the party that was part of slavery, KKK, Jim Crow, that has killed over 40 percent of our black babies, 20 million of them.

“State of California, 75 percent of our black boys cannot pass standard reading and writing tests: a Democratic state,” he said.

“So yes, let’s pay reparation. Let’s pay restitution. How about the Democratic Party pay for all the misery brought to my race?” Owens said in a statement that sent shockwaves.

Everyone at the hearing did what they could to have a mic drop moment but it was Owens who had the bomb heard around the world.

New Jersey Sen. Cory Booker, a candidate for the Democrat nomination for president, gave his testimony before Congress asking for reparations.

The senator is worth an estimated $3 million and he wants people to cut him a check for something he never experienced.

Writer Ta-Nehisi Coates told Congress that he does not think we should rule out cutting checks” to African-American descendants of slaves.

Could you imagine you taxes going to cut checks to individuals who you did nothing to for something they never experienced?

“One black president does not compensate for 250 years of slavery, 90 years of Jim Crow segregation, 55 years of oppression, and the racist white president who followed,” CNN commentator Keith Boykin said, referring to Sen. Mitch McConnell’s comments on reparations.

One black president does not compensate for 250 years of slavery, 90 years of Jim Crow segregation, 55 years of oppression, and the racist white president who followed. #reparations pic.twitter.com/if6JbxL9Qf