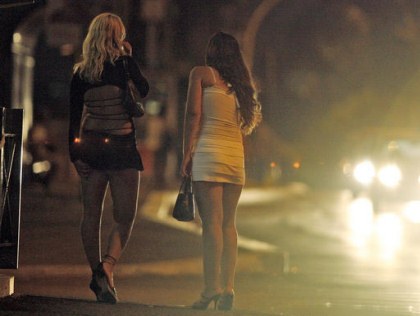 While we all scratch our heads and wonder what is happening to our kids, maybe we should pay more attention to what they are watching and reading.

Teen Vogue is a very popular online site ranked 13,485 worldwide by Alexa which according to Rank2Traffic (online traffic estimator) gets roughly 3.83 million user sessions per month. Even if it’s not your kids, some of their friends are reading Teen Vogue and telling your kids about it.

Millions of American kids are reading this trash and that puts all of our kids at risk.

I ran across a very disturbing article yesterday, from the aformentioned Teen Vogue, that was published back in April of this year.

The article is titled “Why Sex Work Is Real Work” and was written by Dr. Tlaleng Mofokeng. Here is her bio:

Tlaleng Mofokeng is a founding member and Vice Chairperson of the Sexual and Reproductive Justice Coalition of South Africa (SRJCZA) and an independent consultant in South Africa, the region and globally.  Her areas of expertise include advocacy training, clinical care, public health policy and content production for public health communication.  She is the South Africa country co-lead for Global Doctors for Choice and Vice-chair of the Soul City institute for Social Justice and Sex Worker Education and Advocacy Taskforce (SWEAT) boards.

She was a recipient of the 120under40 award that recognizes a new generation leaders in Family Planning by Bill and Melinda Gates Foundation in 2016, was named one of 200 Young South Africans by Mail and Guardian in 2016, the Most influential South African in 2017 and in 2018 by Avance Media.

She is published by The Guaradian, Sunday Times, Daily Maverick, Mail and Guardian and presents on Al Jazeera’s “The Cure” medical series and is currently host and associate producer of “Sex Talk with Dr T” a sexual health tv show aired on DSTV.

She is lead consultant for Nalane for Reproductive Justice.

Here is what our young people are reading at Teen Vogue:

The government of Amsterdam, a city known worldwide for its Red Light District, will ban the popular guided tours through that area starting in 2020. The ban stems in part from complaints calling the tours a nuisance that lead to congestion in the narrow canal-side streets. But city officials have also said the ban is out of respect for sex workers. “It is no longer acceptable in this age to see sex workers as a tourist attraction,” city councillor Udo Kock said, according to The Guardian. There’s one problem: Many sex workers are opposing this plan.

Sex work is legal in Amsterdam, but it isn’t in many other places, though some people are working to make it so. In South Africa, where I am based, for instance, sex workers are calling for decriminalization and legal reform. They argue that sex work is work, as affirmed by the International Labor Organization (ILO), a specialized agency of the United Nations. This situation in Amsterdam, and the continued criminalization of sex workers around the world, is yet another example of how we disregard the needs and opinions of the people most impacted by policies. But even more so, it’s another example of how we misunderstand what sex work actually is. I am a doctor, an expert in sexual health, but when you think about it, aren’t I a sex worker? And in some ways, aren’t we all?

Is this woman insane? What would qualify a man like me (monogamous, happy marriage) as a sex worker? Most men out there probably understand that as a marriage develops and endures, sex becomes less frequent and eventually we become more well-rounded men that no longer think with the organ below our belts. The love grows stronger even though the libidos may eventually calm down considerably.

Prostitution goes against a sacred bond of one woman and one man that stand united before the eyes of God.

So, what exactly is sex work? Not all sex workers engage in penetrative sex, though, undeniably, that is a big part of sex work. Sex-worker services between consenting adults may include companionship, intimacy, nonsexual role playing, dancing, escorting, and stripping. These roles are often pre-determined, and all parties should be comfortable with them. Many workers take on multiple roles with their clients, and some may get more physical while other interactions that may have started off as sexual could evolve into emotional and psychological bonding.

You can read the rest here if you’d like…

There is a major intimacy problem within our society, and accepting sex workers and robots in place of people developing meaningful & loving relationships is not helping to fix that.

America’s teens are not learning the benefits of loving and lasting relationships.

They are learning how to replace sexual urges with quick fixes and being told that becoming a sex worker is an honorable profession.

If you want to live in a place where sex work is legal and encouraged, maybe you should move to Amsterdam. This depravity has no place in a country built on Christian principles.

To any who do not understand how destructive the underage sex industry is in America, you might want to do some reading on The Nxivm Cult.

If you aren’t teaching your children about sex and its role in their lives, Teen Vogue will be happy to do it for you.