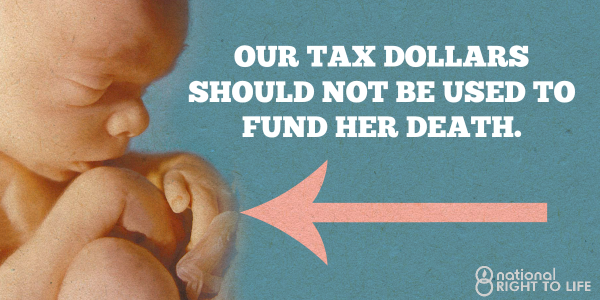 A panel of three judges, all appointed by previous Republican presidents, said the administration will likely prevail in the legal battle over the Title X family planning program since the Supreme Court held up similar Reagan-era rules almost 30 years ago, though they were reversed by the Clinton administration before taking effect. –POLITICO

So it took 3 Republican-appointed judges to bring justice to abortion clinics AND give the American taxpayers what they want.

Americans may be slightly in favor of a woman’s right to choose, but they are also strongly in favor of that woman’s responsibility to pay for that choice.

Even Liberal Slate admits it…

At Slate, writer William Saletan admits that taxpayer funding of abortion — which every Democratic presidential candidate is currently supporting — is a wildly unpopular idea in America, even among women. “Recent polls debunk much of what progressives believe,” the subheading of Saletan’s article reads. For years, polling has shown that taxpayers are solidly against paying for other people’s abortions.

While taxpayer-funded abortion is an idea that appeals to the Democratic Party’s political base, it doesn’t appeal to voters in general. “In every poll, a plurality of Americans opposes public funding of abortions,” Saletan notes. “In every poll but one, that plurality is a majority. The questions vary, but the result is the same.”

Regardless of how the left-wing rags spin this, this is something that Americans want.

They may favor a woman’s right to choose. But she has to pay for her own choice.

In a bombshell ruling on Thursday, the 9th Circuit gave President Trump a green light in his pursuit to pull taxpayer funding from Planned Parenthood and other abortion providers.

Judges on the Ninth Circuit Court of Appeals said Thursday that a pro-life Trump administration rule blocking abortion providers from getting federal Title X dollars can go into effect for now.

A panel of three Republican-appointed judges found that there was no reason to continue lower courts’ injunctions against the proposed pro-life rule, since the Supreme Court already held up similar policies as constitutional almost 30 years ago.

“Absent a stay, HHS will be forced to allow taxpayer dollars to be spent in a manner that it has concluded violates the law, as well as the Government’s important policy interest in ensuring that taxpayer dollars do not go to fund or subsidize abortions,” the three judges wrote in a unanimous opinion.

The 2019 Title X revision, which was put forward back in February, “prohibits the use of Title X funds to perform, promote, refer for, or support abortion as a method of family planning” and also bars funding recipients from performing abortions or referring clients for abortions at the same physical facility that gets the taxpayer money.

The Ninth Circuit judge panel found this rule to be a “reasonable interpretation” of Title X, which was originally passed in 1970 and barred funds from going to “programs where abortion is a method of family planning,” per section 1008.

“We are pleased that the Ninth Circuit has cleared the way for this important executive branch action to take effect while our appeals are pending,” Department of Justice spokeswoman Kelly Laco said in a statement to Blaze Media. “The Department of Justice’s position is supported by long-standing Supreme Court precedent and we are confident we will ultimately prevail on appeal.”

Red State reports that the total hit will be in the neighborhood of $60 Million in funding that will no longer go to abortion providers.

June 20, 2019 – The 9th U.S. Circuit Court of Appeals ruled today that President Trump can move forward with his a plan to defund “on-site” abortion facilities by an estimation of nearly $60 million.

The “Protect Life Rule” was introduced by Trump as a fulfillment of one of his campaign promises. The initiative proposes requires healthcare facilities that also provide abortion services and are receiving federal funds under Title X to separate out their abortion program from their healthcare services.

This is a plan widely (and correctly) identified as a way to strip taxpayer funds from Planned Parenthood. Organizations like the nation’s largest abortion provider have traditionally been allowed to house their healthcare and abortion services under one roof. Prolife advocates have long complained that this only emboldened Planned Parenthood to use public funds for abortions although they claim they only use “private funds”.

Regardless of how Americans may feel about abortion, they strongly oppose having their tax dollars paying for it.

How many future leaders will be born now instead of murdered?

The fight rages on, but this is a big win for our side.