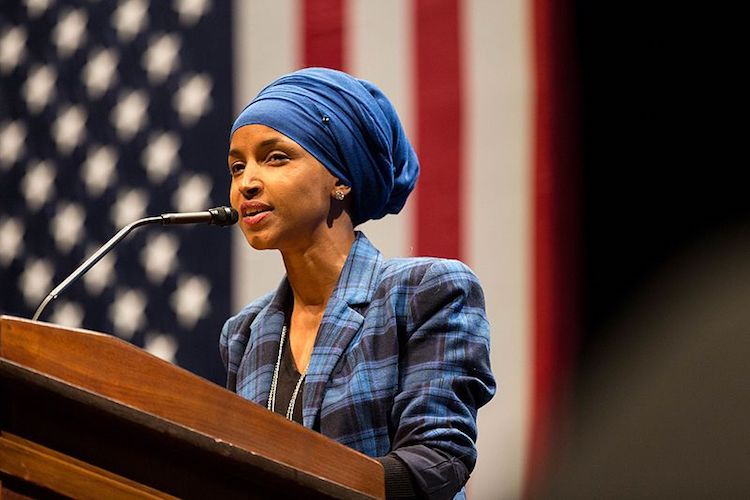 (True Conservative Pundit) How Ilhan Omar ever got elected to office this writer will never understand.  Why would anyone in his or her right mind support an anti-American, anti-Semitic, and Islamic terror supporter for public office?

In the latest Omar idiocy, she retweeted the comments of fellow non-thinker Angela Rye, who is a CNN contributor – surprise, surprise.

“In 1933, there were concentration camps. In 1941, they were death camps and that is where we are going if our consciousness are not quickly pierced, it is a problem — do not laugh it off,”  (source) 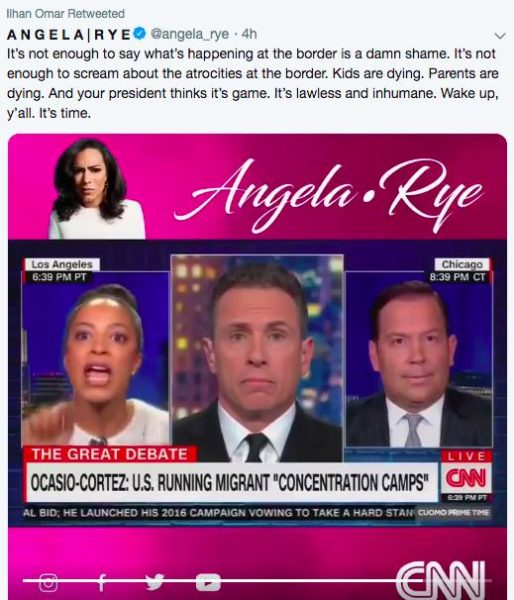 “Kids are dying in cages on our border. Families are being put in ‘freezers’ & ‘dog pounds.’”

“We are calling these camps what they are because they fit squarely in an academic consensus and definition.”  (source)

We are calling these camps what they are because they fit squarely in an academic consensus and definition.

History will be kind to those who stood up to this injustice.

So say what you will. Kids are dying and I’m not here to make people feel comfortable about that.

Just days before this, Omar sided with Iran over her own country!

Iranian Tanker Attack: Ilhan Omar Once Again Sides With an Islamic Country Over Her OWN!

“None of this would be happening if Trump didn’t back out of the Iran nuclear deal.

America’s response should be to return to the table and reinstate the Iran nuclear deal.”  (source)

So let me get this straight, Omar thinks that the Iranian government’s choice to attack tankers is Trump’s fault because he pulled the U.S. out of a bad deal brokered by Barack Obama.  Said deal gave Iran BILLIONS in cash and other assets.  Iran has been cheating on this “deal” all along.  But as we are the good ole US of A – we are to “suck it up buttercup,” and deal with it.  I think NOT.

Ilhan Omar is all for taking in refugees, while at the same time doing her best to make Trump look like he is evil and cares nothing for refugees and immigrants – I want to point out here that Donald Trump’s own wife Melania is an immigrant.  Omar won’t repeat that of course, it does not play well with the “Trump is evil” mantra.

“At a time when we are seeing a record number of displaced people, forced into becoming refugees, we must remember to have compassion and open hearts and minds to those experiencing unfathomable circumstances. Join me in saying refugees are welcome here!”

At a time when we are seeing a record number of displaced people, forced into becoming refugees, we must remember to have compassion and open hearts and minds to those experiencing unfathomable circumstances. Join me in saying refugees are welcome here!

“This country was founded on the ideas of justice, of liberty, of the pursuit of happiness. But these core beliefs are under threat. Each and every day. We are under threat by an administration that would rather cage children than pass comprehensive immigration reform.”

This country was founded on the ideas of justice, of liberty, of the pursuit of happiness. But these core beliefs are under threat. Each and every day. We are under threat by an administration that would rather cage children than pass comprehensive immigration reform.

There are multiple problems with Omar’s assertions here.

Who are you going to believe on this, the leftist lying publications who paint a completely different picture, or the Acting DHS Secretary who testified before Senate Judiciary Committee Chairman Lindsey Graham that as many as 90% of refugees, immigrants do not show up?

What about vetting those we let into this country?  Or are we supposed to just let anyone walk in the door?  Why does Ilhan Omar not address this?

The Trump administration would rather “cage” children then bring about meaningful immigration reform.  In the first place, children are not placed in cages; this is manipulation and outright lying on the part of Omar.  Second, detaining children and families has been going on for a very long time.  Funny, but no one even blinked an eye when the very same things occurred under Obama’s administration.  Second, President Trump DID and is pursuing immigration reform, but the Democrats refused to have anything to do with it.  Why you ask?  Because Trump’s immigration reform plan includes two items the Dems will not endorse, period.  Those items are: border security, and merit based immigration – just like our neighbor Mexico has.

Then there are Omar’s campaign finance violations.

How about Omar’s fraudulent tax returns and her marriage to her own brother?

What about the Islamic terror-tied organizations that support Ilhan Omar?

Ilhan Omar needs to be removed from office immediately.  She is blatantly anti-Jew, anti-Israel, anti-American, and her first loyalty is to Islam, NOT her own country!  She should be censured, and then expelled from the House of Representatives.

Final food for thought: looking at Ilhan Omar’s Twitter account we see that she refers to herself as an – Intersectional Feminist.  Well what exactly does THAT mean?  Here is the definition of “intersectionality”:

“The view that women experience oppression in varying configurations and in varying degrees of intensity. Cultural patterns of oppression are not only interrelated, but are bound together and influenced by the intersectional systems of society. Examples of this include race, gender, class, ability, and ethnicity.”  (source)

So intersectionality is the word for the oppression of women – but yet Ilhan Omar identifies as a Muslim.  If Islam is not the greatest oppressor of women on the face of the earth, then it is in the top two list for doing so.