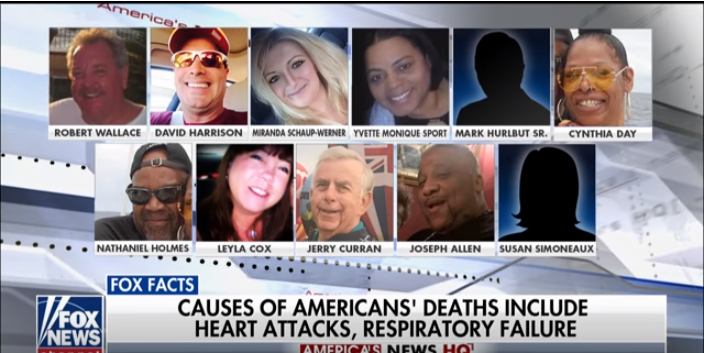 Depending on the news site you trust, as many as 11 American tourists have died in the Dominican Republic within the last year. Here is the latest report from Fox News:

Authorities are investigating deaths of at least 11 U.S. tourists in the Dominican Republic since June 2018.

Dominican Republic Tourism Minister Francisco Javier Garcia pushed back on reports of a pattern of suspicious deaths of American citizens Friday, as the U.S. State Department hiked the official number of Americans who have died there in the last year to 10.

The tourism minister said the number of Americans who have died in the Dominican Republic has actually decreased this year, and that over the last three years there was a 56% reduction in the number of U.S. tourist deaths in the DR.

On Friday the U.S. State Department confirmed the death of Mark Hurlbut in the Dominican Republic in June 2018.

Curran, a retired police officer, and Hurlbut join a list of eight other people who have died in the Dominican Republic in the last year, including Yvette Monique Sport who died in June 2018, David Harrison who died in July 2018, and Robert Wallace, Miranda Schaupp-Werner, Cynthia Day, Nathaniel Holmes and Joseph Allen, who all died this year.

Major networks have started to play the conspiracy card in their reporting. On June 5th ABC News also reported that 3 Americans had died in the same hotel of the same ailment, within days:

An American woman died of respiratory failure in her hotel room days before a Maryland couple was found dead of the same cause, hotel staff told ABC News.

A Colorado couple recently reached out to CNN to say that they were poisoned at the same resort:

As authorities investigate the deaths of three Americans at a resort in the Dominican Republic, a Colorado couple has come forward saying they were poisoned at the same facility. CNN’s Drew Griffin reports

Are Americans being deliberately poisoned in the Dominican Republic?

It sure looks it.

For multiple deaths and illnesses to occur and the same hotels seems more than just a coincidence.

3 people meeting their end at the same hotel, all of respiratory failure within days of each other, seems like a conspiracy.

Stay the hell out of The DR, unless you are looking for assisted suicide by hotel staff.