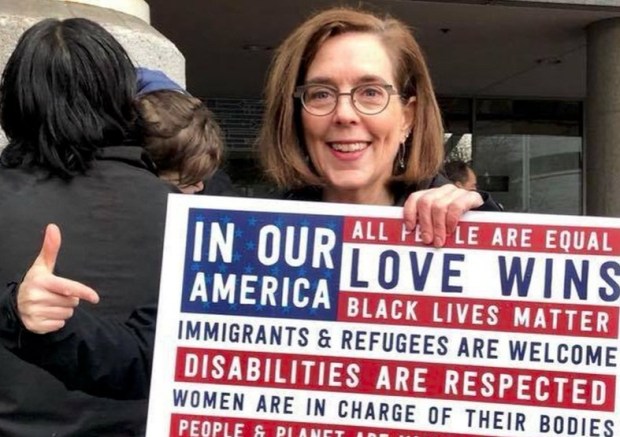 Fed up with a Democrat supermajority hell bent on destroying the state’s economy with a disastrous “cap-and-trade” bill that combines the worst “climate change” hoax data into legislation to devastate businesses, all 11 Republican state senators have fled Oregon to deprive them of a quorum needed to conduct a vote.

As such, Democrat Oregon Gov. Kate Brown has acted on a request from Democrats in the chamber to have the state highway patrol serve the function of “sergeant-at-arms” and round up the errant GOP senators, hauling them back to the capital of Salem by force, if necessary.

Fox News reported Friday that all of the GOP lawmakers had left the state, hoping to “run out the clock” on the current legislative session, which ends June 30.

The original vote on the legislation was scheduled for Thursday, but Republican lawmakers bailed, depriving the chamber of the necessary 20-member quorum to vote on bills. At least two Republicans would have to return to the capital in order to hold a vote at this point.

The network managed to catch up to one GOP lawmaker in Idaho.

In a “call to action” a militia group known as Oregon Three Percent said it would provide security, transport and refuge for the absent Republican senators.

“We will stand together with unwavering resolve, doing whatever it takes to keep these senators safe,” the group said on its Facebook page.

The Oregon state senate canceled its Saturday session over concerns that militia groups could gather outside the capital and threaten lawmakers. https://t.co/ZmyiBsKEbd #USNews #USRC pic.twitter.com/pXAvfoOp5w

The Statehouse’s minority Republicans blasted the plan, saying it would raise gas prices and cause businesses to move. They also say it would hurt rural economies that depend on the industries targeted under the legislation.

What’s the big deal? The Council on Foreign Relations, in dissecting then-President Obama’s ‘cap-and-trade’ bill, noted that such schemes are necessarily counterproductive to businesses:

Almost all acts of economic production are powered by combusting fossil fuels (coal, oil, and natural gas), a process that emits greenhouse gases thought to cause global warming. A cap-and-trade system is simply a mechanism to put a price on emissions in order to compel businesses and consumers to emit less. That is, it’s essentially an emissions tax. But greenhouse gas emissions are virtually synonymous with energy use, so it’s actually a roundabout energy tax. In fact, economists agree that the simplest, most efficient way to reduce emissions is a direct tax. Politicians, however, are terrified of the “t-word,” which is why they have embraced a cap-and-trade system.

The bottom line: Raising the cost of production and doing business (cause) will have predictable effects: Loss of jobs, loss of revenue, higher prices, higher energy costs. And for some in Oregon — farmers, truck drivers, loggers — the law would decimate their industries.

And worse, there is no real consensus that human activity is causing the climate to change. In fact, the Left’s predictions of doom and gloom are routinely debunked by reality.

In particular, Republicans say that gas prices alone would rise 22 cents a gallon almost immediately, and much more over the long haul.

As for the state highway patrol, Oregon officials said they are working with law enforcement in other states to locate the missing Republican senators. When Fox News asked if that meant troopers would handcuff senators, OSP officials said “no physical contact is permitted” without permission from the superintendent.