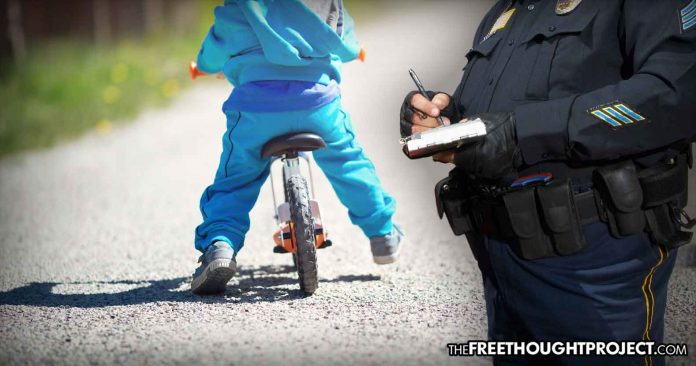 Denver, CO — In a likely move to bolster the city’s bottom line, Denver Park Rangers are stepping up efforts to catch people speeding. No, they aren’t going after cars driving on the road, they are going after bicycles who are driving on the designated bicycle path.

Throughout parks in the city, the set speed limit for riding a bicycle is apparently 15 miles per hour. Rangers have setup speed traps around parks, using radar guns to clock people on bicycles who would dare cross that threshold.

“We try to suggest to people to get a speedometer, this way you know how fast you’re going. There are a lot of apps that you can download for free or you can go buy one, all tools to make sure you are recreating safely in the park,” says Denver Park Ranger, Jodie Ehrich.

For riding your bicycle faster than 15 mph, you will get a $100 ticket for the first offense. If you are caught “speeding” on your bicycle a second time, that will more than double to $250. It can also lead to cyclists getting banned from parks and more fines totaling over $500.

“Our Park Rangers and Trails Team are hosting pop-up safety and educational outreach events to remind trail users of proper etiquette and safety on trails,” said Cyndi Karvaski, a communications specialist with the department. “Our Rangers are monitoring speeds to bring awareness to these issues as well as the 180-day rule that allows electronic vehicles on Denver trails and park facilities.”

Apparently, this move to ticket cyclists expands outside of parks as well, as the Denver Municipal Code bars bicyclists from riding at “a speed greater than is reasonable and prudent under the conditions then existing or in excess of the posted speed limit.”

Colorado statute says, “every person riding a bicycle or electrical assisted bicycle shall have all of the rights and duties applicable to the driver of any other vehicle.”

Naturally, this rule is receiving resistance to those paying attention.

“Speeds vary as one goes up or downhill and 15 mph is quite slow for a descent,” said Brian Weiss, a Denver lawyer who specializes in bike law, according to the Daily Sentinel.He added: “It should be noted that in parks the paths are more narrow than streets and most of the Denver parks are relatively flat.”

What’s more, Weiss notes that there has not been an increase in accidents or any other factor which sparked this crackdown on speeding bicycles.

“I am not aware of any particular incident or crash that caused the heightened speed reduction campaign or involvement,” Weiss said.

While we’ve seen cops go undercover as homeless people, construction workers, and even Disney characters in an effort to separate citizens from their money, we’ve never reported on the police state going after fast bicycle riders. This move is unprecedented in the arena of revenue collection.

Given the fact that there have been no accidents or injuries or anything to prompt this response by authorities to ticket citizens, we can only come to the conclusion that there is a gap in the budget somewhere that needs to be filled. Because the state cannot generate money on its own, it will turn to the tax cattle to fill those gaps. Peaceful bicycle riders be damned.