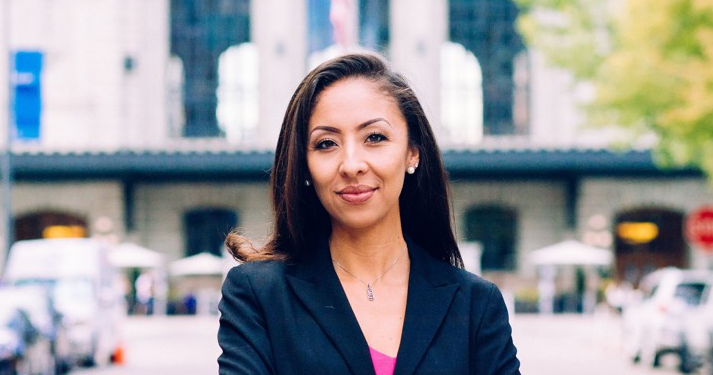 Less than 2 weeks ago the City of Denver elected a bonafide, Capital C, Communist to its city council.

Candi CdeBaca won a runoff race last week against former Denver city council president Albus Brooks, and she did it by promising to implement communist policies “by any means necessary.”

Another AOC popping up in Denver?

But what’s mortifying is that this woman may be a real communist… and not a budding “small c” communist like AOC.

“It’s historic,” said Carlos Valverde, state director for Colorado Working Families, a political activist group that supported CdeBaca. “It is in the vein of Alexandria Ocasio-Cortez. … A victory that really demonstrates people power over money power.”

CdeBaca defeated Brooks 52.4 percent to 47.6 percent, though military and overseas ballots are still being counted.

“I don’t believe our current economic system actually works. Um, capitalism by design is extractive and in order to generate profit in a capitalist system, something has to be exploited, that’s land, labor or resources,” CdeBaca alleged.

I think Denver residents are smoking too much of that legal weed.

They need to learn their history.

I don’t believe our current economic system actually works. Um, capitalism by design is extractive and in order to generate profit in a capitalist system, something has to be exploited, that’s land, labor or resources.

And I think that we’re in late phase capitalism and we know it doesn’t work and we have to move into something new. And I believe in community ownership of land, labor, resources, and distribution of those resources.

And so, whatever that morphs into I think is what will serve community the best and I’m excited to usher it in by any means necessary.

She revels in her self-appointed role as a “disrupter” telling reporters that she is “excited to be a disruptor, to hold the mayor accountable, and to make sure outside interests don’t dictate how we govern.”

While it’s not exactly clear what CdeBaca meant when she said “by any means necessary,” PBS notes that Malcolm X used the phrase and it meant “up to and including the use of violence.”

Is Alexandria Ocasio-Cortez the model for the next generation of American “leaders”?

America can not and will not go the way of communism.

As of 2018 there were move CIVILIAN owned guns than civilians in the USA:

Let’s see what Lithuanian Gabrielle Hoffman says about escaping communism and the merits of gun ownership:

My parents never despised guns before coming to America, except when they were in the hands of bad people.

When they came here 30 years ago, they were intrigued by the American way of life and boundless freedom here. They knew Americans owned firearms (especially the likes of actor John Wayne) and proudly touted the Second Amendment. Compared to the U.S., Soviet-occupied Lithuania was gun-free except for those in elite governmental positions. My dad always said the Soviets succeeded in oppressing Lithuanians and others by first disarming them. I always knew he was right, but aimed to confirm his assertions. Low and behold, he was right about gun confiscation as a pretext to installing tyranny in a country.

So elect all the communists you want America.

This is just an excuse for many of us to buy more bullets. 🙂