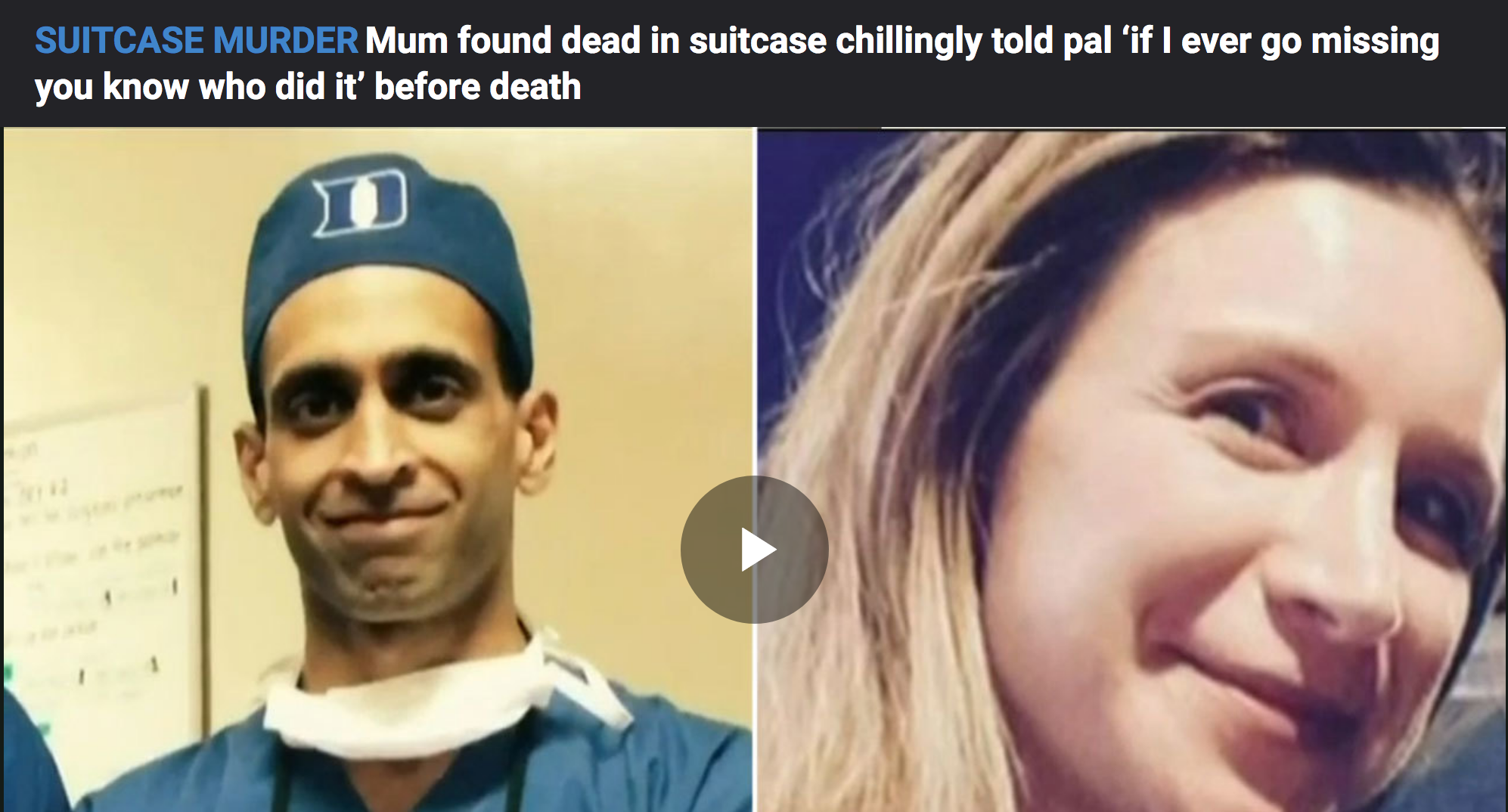 A cautionary tale for non-Muslim women who might consider dating someone raised in the Islamic faith.

He broke his wife’s neck and ribs, and choked her to death as their three children slept. Like all honor killing victims, A summary a long history of  verbal, emotional and physical abuse.. Shamji repeatedly sexually assaulted her, she said, and once choked her to the point she passed out. He only got 14 years for subjecting this woman to a life of abuse and terror, taking her life and leaving  her children without their mother.

“He has destroyed all of our lives,” the victim’s mother, Ana Fric, told the court. “Elana was the child that every parent could hope for.”

Mohamed beat her for years, controlled her every move and what she posted to social media.

…..their Facebook and Instagram accounts to illustrate media stories present a union that appeared idyllic, relentlessly happy, even enviable: they’re smiling for the camera, hugging affectionately on beach holidays, pictured with their young children. We know now it was a faux show, a curated fiction. Fric said so herself via prior statements read at Shamji’s preliminary hearing. Her husband controlled her social media accounts, she told a friend. “Don’t believe what you see on Facebook,” she is quoted, calling it “Fakebook.”

Mohammed Shamji was a Ontario Medical Association delegate. He enjoyed an “elite” education and a reputation as a “brilliant surgeon.” His father, too, is also an acclaimed surgeon. Despite all that Islamic mores and traditions overruled all that …… civility. He may be a disgraced doctor but he can hold his head up at the mosque.

According to the Toronto Life piece, Fric withheld details from family and friends, including a serious assault by her husband in October 2016 that she relayed to her lawyer. They saw red flags but didn’t want to intervene—or saw it as a private matter. Her parents came upon the couple squabbling when they were dating, with Elena crying; they chalked up to “a harmless lovers’ quarrel.” Years, later they overheard Shamji screaming: “You fucking bitch! You stupid fucking bitch!” at their daughter. They’d come to her side in 2005 after he attacked her and she called police. (here)

Muslims commit 91 percent of honor killings worldwide. The Palestinian Authority gives pardons or suspended sentences for honor murders. Iraqi women have asked for tougher sentences for Islamic honor murderers, who get off lightly now. Syria in 2009 scrapped a law limiting the length of sentences for honor killings, but “the new law says a man can still benefit from extenuating circumstances in crimes of passion or honour ‘provided he serves a prison term of no less than two years in the case of killing.’” And in 2003 the Jordanian Parliament voted down on Islamic grounds a provision designed to stiffen penalties for honor killings. Al-Jazeera reported that “Islamists and conservatives said the laws violated religious traditions and would destroy families and values.”

A MUM WHO WAS FOUND DEAD IN A SUITCASE CHILLINGLY TOLD HER PAL BEFORE HER DEATH “YOU WILL KNOW WHO DID IT” IF SHE EVER WENT MISSING.

Elana Fric-Shamji, 40, was murdered by her abusive husband Mohammed Shamji, 43, four days after she filed for divorce.

On the surface, the two doctors appeared to be the perfect couple with three children aged 11, eight and three in Toronto.

However, Shamji had unleashed a tirade of physical abuse over his wife of 12 years and controlled her social media and finances.

Police had been called to the family home over a domestic disturbance where Elana told officers her husband had put such a grip around her neck that she’d become unconscious.

Elana had confided in friends that Shamji’s tirade of abuse behind closed doors escalated.

She told one pal: “If I ever go missing, or if something ever happens to me, you will know who did it.”

In November 2016, the physician filed for divorce against her neurosurgeon husband after she discovered Shamji was being unfaithful.

She instructed her lawyers to serve Shamji the divorce papers on November 28.

Two days later, Shamji reported his wife missing saying she had taken a suitcase and left.

He’d sent her a text saying: “Good morning. Not sure where u are. I guess I will get kids ready and take them to school. Pls call.”

Police found the suitcase Elana had left in, but with her body in it at an underpass 21 miles away from their home.

She was a victim of blunt force trauma and strangulation.

Investigators determined she was hit with a blunt force object in the couple’s garage.

He broke his wife’s neck and ribs, and choked her to death as their three children slept.

Elana was beaten so badly her family barely recognised her when they went to see her body.

Elana’s eldest daughter was even woken by the sound of her mum screaming, but her dad had ushered her back to bed.

Shamji was arrested the day after the grim discovery and was charged with first-degree murder and committing an indignity to human remains in the death of his wife.

Chillingly, he had even performed surgeries as if nothing had happened.

He denied having anything to do with his wife’s killing, but days before this trial was set to begin in April this year he pleaded guilty to second-degree murder.

This prevented his eldest daughter from having to testify during trial.

I’m so sorry we don’t have the death penalty in this country because Mohammed Shamji deserves death for what he did
Anna, Elana’s mum,

Shamji made a statement court saying he wished he took his own life instead of his wife’s.

He said: “Mine was the ultimate betrayal to a woman who gave so much to so many people, especially me.

“There have been no justifications or excuses for what I have done that has hurt so many people.

“Somehow, I turned my back on my oath and calling and took a life, Elana’s life.

“I don’t know how I could cause such pain and anguish.”

Shamji was sentenced to life in prison with no chance of parole for 14 years.
Superior Court Justice John McMahon said during sentencing: “This is an extremely tragic case. Three young children have lost their mother forever.”

She said: “I’m so sorry we don’t have the death penalty in this country because Mohammed Shamji deserves death for what he did.
MOST READ IN WORLD NEWS
‘BALD AND SCARRED’
Michael Jackson cops reveal state of his body ten years after his death
HEAVEN SENT
Woman scrawled ‘it’s real’ after she ‘died for 27 mins and said she saw heaven’

“Only Elana’s children had given her the purpose to go on. I see my daughter in them every day, and I talk to her at her grave.

“He has destroyed all of our lives. Elana was the child that every parent could hope for.”

Joe, Elana’s dad, choked through his tears as he said: “I am an old man, almost 74 years of age, so my loss will end before too long, but the loss of the children will go on for decades and decades.”