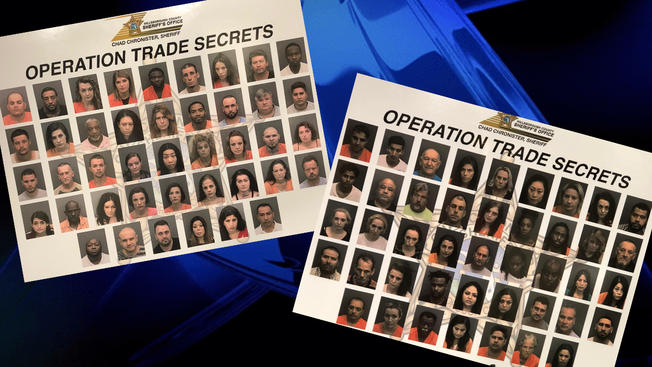 The following video is courtesy of FOX 13 News – Tampa Bay:

Hillsborough County deputies rounded up dozens of men and women suspected of sex-related crimes as part of a six-month operation targeting human traffickers.

Hillsborough County deputies rounded up dozens of men and women suspected of sex-related crimes as part of a six-month operation targeting human traffickers.

“The efforts behind Operation Trade Secrets will have no ending until human trafficking is stopped,” the sheriff said. “Whether you live here, are vacationing or visiting for any of our large upcoming sporting events like Wrestlemania or Super Bowl LV, there is zero tolerance for this type of predatory behavior. Our message for anyone involved with the despicable practice of human trafficking: stop because we’re coming for you.”

Marcell Walsh, 40, is the only person facing a human trafficking charge after, according to deputies, a woman told deputies Walsh was forcing her into prostitution.

Chronister believes there may be many more similar cases.

Trump promised to throw his full weight behind fight against human trafficking and this appears to be the latest small wave from what has been a tsunami of sexual-exploitation victories. Let’s not forget the major victory against NXIVM and Keith Raniere recently.

This is from WhiteHouse.gov:

This is an urgent humanitarian issue. My administration is committed to leveraging every resource we have to confront this threat, to support the victims and survivors, and to hold traffickers accountable for their heinous crimes.

President of the United States

Yes that has everything to do with human trafficking.

The Daily Beast reported last year, “According to Catherine Oxenberg, the former Dynasty star who helped take down a sex cult, NXIVM leader Keith Raniere was a man on a sick mission. In her new book, Captive: A Mother’s Crusade to Save Her Daughter from a Terrifying Cult, Oxenberg sheds light on a number of Raniere’s more sinister schemes.”

Oxenberg says that while gathering information on NXIVM, she discovered that Raniere was set on world domination—and had the Mexican connections to make his dreams a reality. Oxenberg notes that ESP had “garnered a big following in Mexico.” She saw it firsthand when she flew to Mexico City to take an Executive Success Programs course entitled “Family Values”.

Just another reason to build the damn wall!

We now live in a country that is hungry to identify, capture and prosecute these people.

Oh who knows what the hell Obama might have done? (clicking this link may disgust you)

As for the recent news out of Florida…