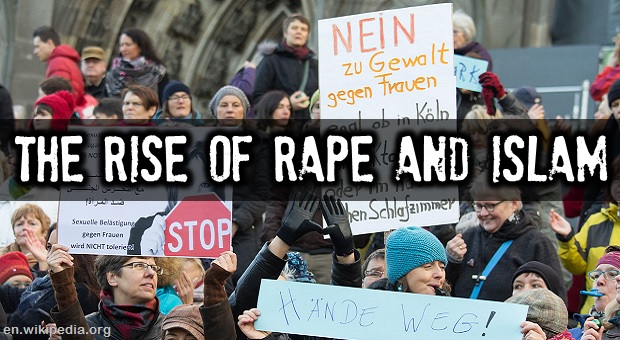 Germany, as much of Europe, is in big trouble.

Muslims are taking over and pushing their evil ideologies on a once great continent.

Women in Islam are, at best, 2nd class citizens and at worst… simple possessions.

They are beat when they don’t obey their husbands and raped at will.

They can be “honor killed” without punishment if the husband has an acceptable reason for the murder.

Americans need to read this so they know the results of open borders, and especially welcoming people from Muslim Nations.

The culture of Islamic countries does not mesh with American values, as you will see by the latest rape story coming out of Germany.

Eleven men, most of them from Syria, have gone on trial in Germany over the gang rape of an 18-year-old woman last October.

The defendants, aged between 18 and 30, were due to appear at Freiburg district court in northwestern Germany charged with raping the young woman outside a nightclub or failing to prevent the attack.

The suspects comprise of one German citizen, eight Syrians, two Algerians and an Iraqi.

The case caused a political storm in Germany amid a national debate over levels of migration. Former CDU Secretary General Kramp-Karrenbauer, for example, called for a harder line in dealing with criminal asylum seekers in Freiburg.

The regional court is preparing for a mammoth trial: 27 trial days have been scheduled, about 50 witnesses have already been summoned. The verdict is estimated for December.

The defendants are accused of spiking the victim’s drink inside the nightclub then subjecting her to a gang rape outside.

According to the prosecution, the woman had previously been offered a tablet of the drug Ecstasy in the club and an unknown substance had been mixed into the drink. The victim was thus defenceless and helpless and went to police the following day.

The primary defendant, a 22-year-old from Syria, is accused of being a prolific offender who was the subject of unenforced arrest warrants for other crimes at the time of the alleged rape.

Heightened security measures are being applied at the court due to the high visitor and media interest.

What would you bet that the “German citizen” was also of Islamic descent?

What if that was your daughter?

The ignorant liberals in America have become allies with the Islamists who invade our borders with intent to do harm.

They wish nothing more than to bring Sharia Law to America.

Sharia Law is not kind to women, nor is it kind to those who hold Christian values.

We must take a stand against Islam before America is lost and left unrecognizable to those of us who will remember the President who Made America Great Again.

The buck has to stop here.

It has to stop now.

This is happening all over Europe.