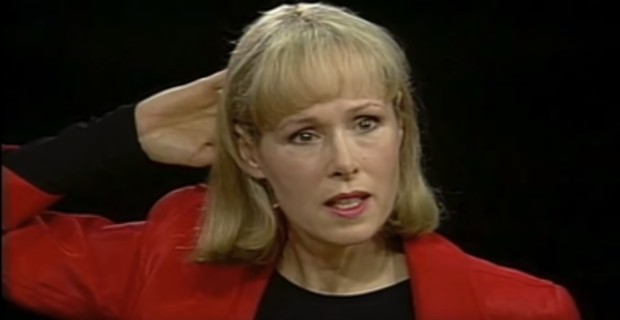 Is E. Jean Carroll trapped in the fantasy world?

Rape fantasies are very common, and up to two-thirds of women have them according to Psychology Today.

Rape fantasies are defined as sexual fantasies that involve the use of physical force, threat of force, or incapacitation (through sleep or intoxication) to coerce someone into sexual activity against their will. –WILEY ONLINE LIBRARY

Yesterday it was reported that E. Jean Carroll had a bizarre meltdown on CNN prompting a speechless Anderson Cooper to cut to a, seemingly unscheduled, commercial break.

That’s what she said…

In case the above video does not survive the day, here is a brief summary of the Cooper/Carroll exchange:

Cooper responded, “I think most people think of rape as a violent assault…”

“I think most people think of rape as being sexy,” said Carroll, stunning Cooper, who immediately went to break but not before Carroll had the chance to say, “Think of the fantasies”.

When Cooper asked Carroll to hold over, she fixed him with a glare and said, “You’re fascinating to talk to”.

But it gets better.

Paul Joseph Watson has uncovered an old video from Charlie Rose, in which the same E. Jean Carroll talks about how women love being dominated.

Trump rape accuser E. Jean Carroll once said that “women love” the idea of a man with a “big club” dragging them into a cave.

The bizarre exchange occurred during a 1995 appearance by Carroll on Charlie Rose’s show. The topic of conversation veered into how, according to Carroll, women were obsessed with men.

During the taping, fellow guest Jimmy Breslin commented, “Yeah but there’s a lot of rules, you can’t walk out of a cave with a club and drag a woman back.”

She then asked Charlie Rose: “When was the last time you took a big old club….?”

The irony becomes somewhat darker given that Rose himself was later accused of abusive behavior and sexual harassment by no fewer than 35 women.

As we reported earlier, Carroll appears to have a rape fixation.

During a more than awkward CNN appearance, she told Anderson Cooper, “I think most people think of rape as being sexy.”

“Think of the fantasies,” she added.

This is the ‘credible’ witness to whom the media has given a platform.

Carroll may not just be trying to sell her new book, she may be genuinely delusional.

Or she may simply be clinging a rape fantasy which she knows never happened.

The fact she doesn’t want to attempt to prove it makes one believe that she knows it is a lie.

The woman certainly is colorful, to put it politely.

Would you trust the testimony of this woman?