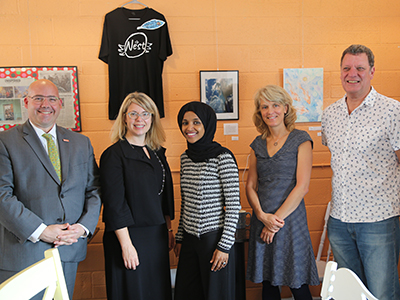 Members of the city council for a Minneapolis suburb have voted to stop reciting the Pledge of Allegiance before council meetings, citing an effort to “create a more welcoming environment.” CBS Minnesota reports the St. Louis Park city council voted unanimously to make the change that will take effect on July 15.
By WBNS-10TV, June 27, 2019:

“In order to create a more welcoming environment to a diverse community, we are going to forgo saying the Pledge of Allegiance before every meeting,” said Council Member Tim Brausen. At the meeting, Brausen said members might recite it in the future if there’s an appropriate opportunity, like if Boy Scouts are there.

David Gohman has made his home in St. Louis Park for nearly 30 years. The American flags that adorn his garden aren’t just decorations.

“It represents a lot to this country. Freedom,” Gohman said. He lives on Flag Avenue and holds traditions like the Pledge of Allegiance close to his heart. “I think it should be said every time, whether it is in school or meetings or whatever,” he said. “We owe it to the country.”

Some council members in his city don’t feel the same way. Five members voted during the June 17 meeting to drop the pledge from their meetings.

Ellen Hertz, a business owner in the city, says she has no problem with the change, but doesn’t think it was necessary.

“In terms of what would offend people and what offends me, that’s not at the top of the list,” Hertz said.

Mayor Jake Spano wasn’t at the meeting when this change was approved. He says getting rid of the pledge wasn’t a big priority for him.

Spano told CBS Minnesota via email: “I think there are more substantive things we should be working on to make our city more open and welcoming.”