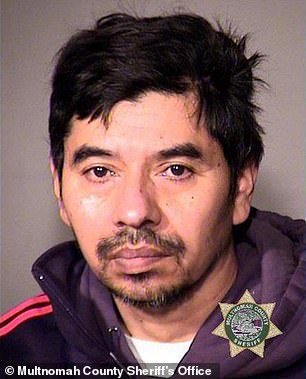 From Daily Mail: U.S. Immigration and Customs Enforcement has released a list of criminal illegal aliens who were released into communities by sanctuary city policies, as federal officials try to convince cities and states to assist immigration enforcement.

The list released last week highlights cases in Oregon, which has the oldest sanctuary state law in the country, and Washington state, which passed an expanded sanctuary state policy last month.

Washington’s new sanctuary law is among the strongest in the nation, barring local police from assisting federal immigration enforcement officers in any way.

In signing the law, Democratic Governor Jay Inslee said, ‘We will not be complicit in the Trump administration’s depraved efforts to break up hard-working immigrant and refugee families.’

ICE argues that sanctuary policies, which bar local officials from notifying federal officials before they release illegal aliens from detention, allow dangerous criminals back into communities, and force ICE agents to conduct arrests at homes and workplaces rather than the controlled environment of a jail.

While he was being held in the Multnomah County Jail, ICE officials interviewed him and determined that he was an illegally present Mexican citizen. The same day, ICE lodged an immigration detainer on Lopez for violating immigration laws.

In April 2019, Lopez was sentenced to 60 days in jail, the maximum allowed under state law for animal sexual abuse, and released on time served.

ICE says that the county jail did not honor the immigration detainer and released him without notice to immigration officials.

After his release, ICE apprehended Lopez at his residence and served him a notice to appear. He is currently being held at ICE’s Northwest Detention Center in Tacoma pending immigration proceedings.

‘There is an inherent increase in risk to personnel and bystanders when ICE officers and agents must go out into the community to proactively locate these previously detained criminal aliens,’ ICE said in a statement.

In October 2017, Rosalio Ramos-Ramos was arrested in Kent, Washington on suspicion of methamphetamine possession after calling 911 and making bizarre confessions to involvement in a supposed sexual assault.

While being booked into King County Jail, Ramos-Ramos made statements that he wanted to die and began fighting with corrections officers, injuring five of them, and was hospitalized for a head injury he himself sustained while officers subdued him.

After seeing his named on the local booking log, ICE identified Ramos-Ramos as an illegally present Honduran citizen with prior felony convictions and four prior removals from the U.S.

ICE told the local police department that policy barred them from arresting people at a hospital, and issued a detainer asking the local cops to hand him over for deportation.

However, Kent police were not on hand when Ramos-Ramos regained consciousness after a medically induced coma and walked free from the hospital.

In January 2018, Ramos-Ramos was arrested again in Seattle on suspicion of killing his cousin, dismembering the body, and stuffing the parts in a suitcase. He was charged with murder and is being held in the King County Jail on a $2 million bond. ICE has lodged another detainer with local jail officials.

In March 2018, Martin Gallo-Gallardo was arrested in Portland, Oregon and charged with domestic violence. While he was detained at the Multnomah County Jail, ICE identified him as a citizen of Mexico who was unlawfully present in the U.S. and lodged an immigration detainer.

ICE says that jail officials did not honor the immigration detainer and released the convicted criminal two days later, without notifying ICE.Following his release, ICE made multiple, unsuccessful attempts to locate and arrest the Gallo-Gallardo.

In October 2018, Gallo-Gallardo was arrested again, this time on felony murder charges for allegedly killing his wife. An autopsy found the wife died from blunt-force head trauma and multiple stab wounds.

Following the murder, the Multnomah County Sheriff’s Office blamed ICE and said federal agents should have tracked down and arrested Gallo-Gallardo after he was released. Gallo-Gallardo is being held in the Clackamas County Jail without bond on the murder charge. ICE has lodged another detainer with local officials.

Mexican national Francisco Carranza-Ramirez, 35, is currently on the run from cops in Seattle after police said that he returned and raped the same wheelchair-bound victim he was previously convicted of sexually assaulting.

Police say that the initial rape occurred in September 2018 when Carranza-Ramirez saw the woman and followed her into her apartment building, attacking her in front of her two-year-old son. The woman managed to surreptitiously dial 911 and left the line open during the attack, and Carranza-Ramirez was caught in the act when police responded.