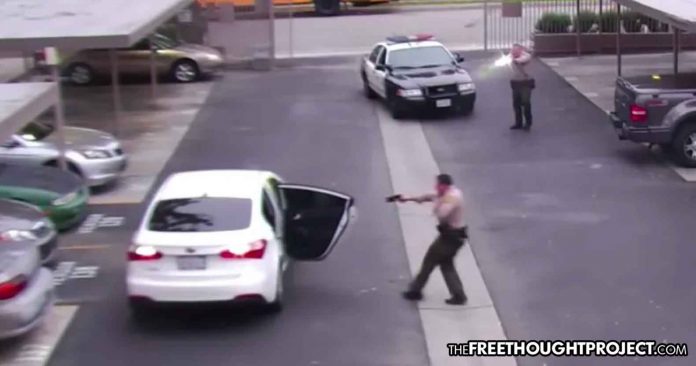 Los Angeles, CA — Earlier this month, in only a 24-hour span, the Los Angeles County Sheriff’s Department and the LAPD were involved in five officer involved shootings. Of those five shootings, four of the people shot by police were killed. One of those killings was captured on video. The victim’s name was Ryan Twyman, who was a 24-year-old father of three.

In the disturbing shooting caught on video, Sheriff’s Department officials are claiming that Twyman used the vehicle as a weapon when he tried to flee and they had no other option but to dump 34 rounds into the unarmed man.

The LAPD waited two weeks to release the footage which showed the shooting and when they did so, Cmdr. April Tardy described it from their point of view, drawing conclusions and making sure to tell the viewers that the deputies were in danger as Twyman attempted to flee.

According to police, as reported by the LA Times, deputies received information that Twyman, who was under investigation for gun possession, drove a white Kia Forte and frequented the apartment complex where the shooting occurred, Tardy said. Months earlier, gang investigators had found guns at his home, but Twyman was not present, Tardy said.

After the guns were found at his home, a warrant was issued for his arrest because the guns were a violation of his probation. When police caught up with Twyman, he was pulling into a parking spot at his home. When the officers attempted to stop him, Twyman put the car in reverse in an attempt to flee.

“As the Kia reversed, the passenger-side deputy was struck with the open rear passenger door and pushed into the center of the parking lot as he attempted to maintain his balance to avoid being knocked down and run over,” Cmdr. April Tardy said in the video edited by police and produced to fit their narrative only. “At that time, both deputies fired their service pistols at Mr. Twyman, to avoid seriously injuring the passenger deputy.”

Although Tardy claims the officer was “struck” by the open door, the video shows that he actually side stepped along with the vehicle as it backed up. All the officer had to do was to take a single step back and he would’ve been out of danger. However, he chose to take a dozen steps to his left in order to fire at Twyman inside the vehicle.

The officer who was near the rear door of the vehicle, shot multiple times into the car as his partner — who was in no apparent danger at all — began shooting through the front windshield.

Even after Twyman looped around and crashed indicating that he was likely shot multiple times, the officers continued shooting. The second officer even retrieved his AR-15 from the trunk and dumped several more rounds into Twyman. In total, investigators found that Twyman was killed from the approximate 34 rounds shot into his body.

Miraculously enough, the passenger in Twyman’s car, Daimeon Laffell, was not hit by a single bullet. After the car was searched, police found no weapons and Laffell was released.

Now, many people are pointing out that the L.A. Sheriff’s deputies who shot and killed Ryan Twyman as he slowly drove his car in reverse, may have violated a strict policy instituted by the department three years ago. Deputies are essentially prohibited from shooting at moving vehicles unless a weapon is present. No gun was found.

However, this didn’t stop the LAPD from calling Twyman’s vehicle a weapon.

“In this case, the vehicle was used as a weapon against the sheriff’s deputies,” Tardy said.

Brian Dunn, an attorney for the family disagrees.

“There’s never any tactical justification for shooting into a moving vehicle,” he said. “The only conceivable way is if it is a shootout and the person inside the vehicle is actively firing at people outside the vehicle.”

The video below is reminiscent of a scene which plays out over and over in this country as cops claim vehicles are attempting to run them down. However, most of the time, the drivers are merely trying to flee the scene and are executed by police who refuse to simply get out of the way.

The video of the incident starts at the 5:30 mark.