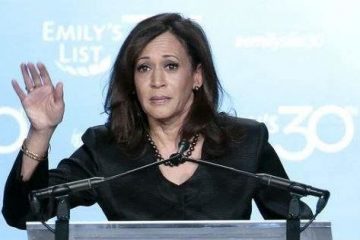 Ordinary politicians stick to lying about one thing at a time. Extraordinarily bad politicians, like Senator Kamala Harris, build a bizarre vortex of flip-flops, lies and terms that mean the exact opposite of what they do.

Maybe she really is Obamaesque.

Senator Harris had signed on to Bernie’s push to ban private health insurance for anything beyond cosmetic surgery and that sort of thing.

That proposal is wildly unpopular and 2/3rds of Democrats still think that Medicare-for-All proposals mean a baseline option, not a ban on other options.

And Harris knows that it’s unpopular.

Since the debate, where she came clean about wanting to ban private health insurance, it’s been a bizarre trail of lies and evasions with Harris claiming that she didn’t understand the question, implausible and unbelievable considering that it had been a highlight of the first debate, or that there still will be ‘supplemental insurance’ without explaining that such insurance won’t really be allowed to cover actual health care.

It’s a dishonest performance, but also a clumsy one, on which rivals will nail her.