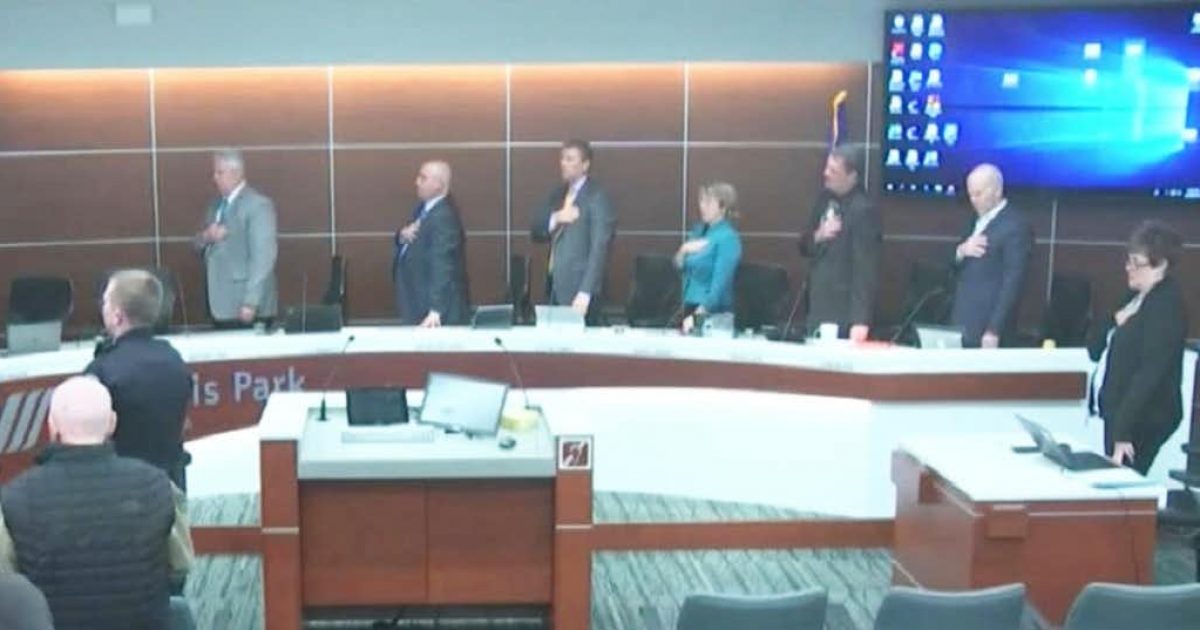 St Louis Park, Minnesota: The St Louis Park City Council decided unanimously on June 17 that the Pledge of Allegiance had been ‘weaponized.’ So they amended their rules to remove it from the beginning of their council meetings. You know, to make everything more “diverse.”

“Unfortunately, some of us feel like patriotism has been so politicized that it’s almost used as a weapon against people…We concluded that in order to create a more welcoming environment to a diverse community we’re going to forgo saying the Pledge of Allegiance before every meeting.” Tim Brausen, St Louis Park council member.

SHOCKING: Democrats on the St. Louis Park, MN City Council voted unanimously to eliminate the pledge of allegiance at their meetings. 🧐 pic.twitter.com/quurAmBm3I

That went over well…not. One member of the council tried to say that “over half” of MN cities removed the Pledge – she was caught in a total fabrication when the Star Tribune fact-checked her. Only two other MN cities had removed it. And at that, the trend toward leftist viewpoints continues.

“Can not believe one person didn’t oppose this. The citizens who voted these people in should be embarrassed and ashamed of the councilmen and themselves.” Russell

“Time to get a new city council!” Delbert

“Why do we need a welcoming community over the Pledge of Allegiance? People are too offended by everyone and everything. If there is such a problem these people do not deserve to live in the USA. What a bunch of traitors!” Kathryn

The (Democrat) St Louis Park Mayor said that at their next meeting on July 8 they would revisit the issue. The new rule goes into effect on July 15. But ‘revisiting’ the issue doesn’t necessarily mean the Pledge will be reinstated. The Mayor is a Democrat who used to work for left-leaning Senator Amy Klobuchar. His tweets read:

1/3 As many have heard the SLP city council recently voted 5-0 to stop saying the pledge of allegiance to start council meetings. I was out of the state with family at the time (as was CM Miller) so while I was not a fan of the proposal, I didn’t get a chance to vote on this.

2/3 Historically when a decision is made by the council, it’s over and we move on but after hearing from more people than I can count in the last day (many admittedly not from SLP), I asked my colleagues to revisit this decision and a majority of them agreed.

3/3 As such, we will be discussing this issue at our next city council meeting on July 8th at 6:30 in the council chambers at City Hall. I haven’t been able to reply to every contact I’ve had but please feel free to dm me or email. I read them all.

He also stated, according to Fox: “First, I think there are more substantive things we should be working on to make our city more open and welcoming and secondly, I’ve always used the last six words, ‘with liberty and justice for all,’ as a reminder to me that not everyone in our community enjoys the benefits of those words and it’s my job to do everything I can to fix that.” Mayor Jake Spano

The mantra of the left: “open and welcoming.” Basically, they’ve inferred that the Pledge is “racist,” so they got rid of it. Democrats are more interested in enabling illegal immigrants than taking care of their own citizens.