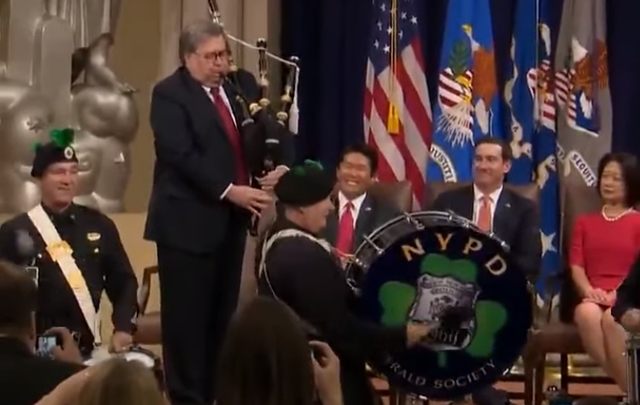 Who knew that Attorney General Bill Barr played the pipes?

The U.S. Attorneys’ Conference opened with a performance from the Emerald Society Pipe Band, consisting of men in kilts marching while playing bagpipes and drums. Barr sat on stage observing the performance until the music suddenly stopped. He then rose from his chair and briefly walked back stage to retrieve a set of his own bagpipes.

Who Knew That Bill Barr is actually a Highly Accomplished Bagpipes Player???

The NYPD Emerald Society pipe band was joined by a very special guest as they struck up to play at a conference at the US Justice Department on Wednesday. Attorney General William Barr himself rose to the occasion to play the bagpipes alongside them.

AG Barr took on a solo of “Scotland the Brave” with the society’s pipe band, which performed just before the attorney general gave his opening remarks at the US Attorneys’ National Conference at the Justice Department’s headquarters in Washington.

“Now how was that for an icebreaker?” he joked after the shock performance, explaining later how the solo came about as a result of a ruined surprise.

“[My staff was] going to surprise me by having the Emerald Society pipe band come down from New York, but as you know I’m very proficient at — dare I say the word — spying,” Barr said.

“And I discovered the plot, and so this was my counter-surprise.”

A long-time bagpiper, this is not the first time Barr has unveiled his hidden talent. After being sworn in as attorney general by President George H.W. Bush in 1991, he also took to his favorite instrument to treat guests to an intimate concert in the Attorney General’s conference room.

Barr claims the last time he played was at his daughter’s wedding in December, just a day after his nomination to be Attorney General was announced.

Pipesdrums actually did a short feature story on Barr in December of 2018:

The most powerful piper in the world soon might not be Richard Parkes, Stuart Liddell, Willie McCallum, Jack Lee or Roddy MacLeod.

William “Bill” Barr, who previously served as the Attorney General of the United States under President George H.W. Bush, has been nominated by President Donald Trump to head the U.S. Justice Department.

Barr was a member of the now defunct United States-based Grade 2 Denny & Dunipace Pipe Band – later Scottish & Irish Imports and City of Washington – from the early-1980s until the early-1990s, until his legal career ascended to the point where his competitive piping was put on hold.

Interesting story of the bagpipes player who would become Attorney General.

Now, if we can only get him to finish his investigation and play this to Comey, Brennan, Clinton or whoever else he might be able to bring down:

Now give us something really newsworthy to write about Mr. Attorney General.