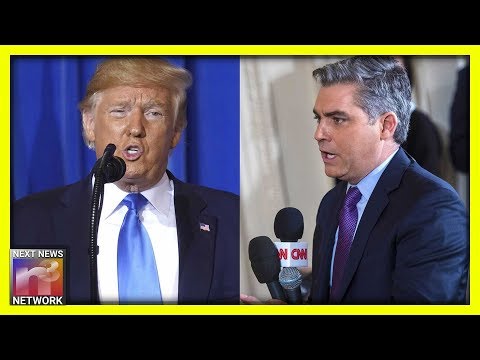 Here’s a video report, courtesy of The Next News Network:

“You did seem to be joking there with the Russian president. Are we taking that to be wrong?” Acosta asked. “And what is it with your coziness with some of these dictators and autocrats at these summits? With Mohammad bin Salman, the Crown Prince of Saudi Arabia, when you were asked about the case of Jamal Khashoggi, you did not respond to that question––were you afraid of offending him on that subject?”

“No, not at all. I don’t really care about offending people,” Trump said. “I sort of thought you’d know that.”

“You passed up an opportunity –” Acosta began.

“And, by the way, congratulations. I understand you have a book. Is it doing well?” Trump asked.

When Acosta replied that the book is doing well, Trump smirked and asked, “really?”

Read the rest at GP…

LOL Classic: CNN’s Jim Acosta Just Held His First Book Signing and No One Showed Up

CNN’s Jim Acosta is in love… with Jim Acosta. The Trump hating White House correspondent has just released a new book (which I will not be reading) and he held a massive book signing event in Arlington, Virginia.

The crowds were enormous and the line for his coveted signature went for blocks.

Samantha Chang at BPR has more:

CNN reporter Jim Acosta attacks President Donald Trump around the clock as a White House correspondent, but he’s more than happy to profit from it.

In a tone-deaf Twitter post, Acosta gleefully tweeted photos of himself at a book signing in Arlington, Virginia.

The title of Acosta’s book — “The Enemy of the People — was stolen directly from President Trump, who slammed the fake news media as the “enemy of the people” for spreading lies meant to gaslight them.

To be clear, President Trump never called the media the “enemy of the people.” That moniker was directed at the fake-news shills who intentionally promote false narratives.

If you’re a member of the media and you take offense to Trump calling fake news “the enemy of the people,” then you just outed yourself as a lying hack.

What’s hilarious is that Acosta was autographing a huge pile of his books in what appeared to be an empty book store. Notably, there were no fans clamoring around him, eager to meet him.

Quite a long line of people waiting for the privilege…. Nevermind. That man is looking in the non-fiction section. Clearly NOT what you're peddling. 📚

Manager: Yes we know, he paid us to let him sit there for a few hours!

I think President Trump might be a big fan of Right Wing News.

Either way, we know Jim Acosta is probably not.