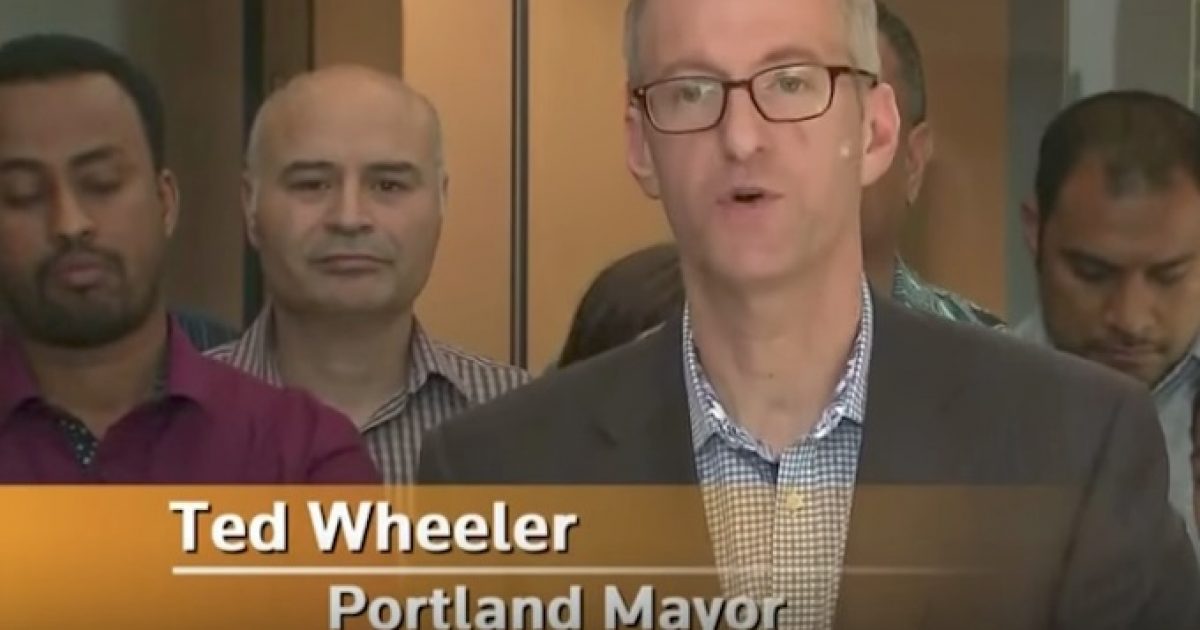 Senator Ted Cruz advocates a federal investigation into the Portland Mayor’s orders to police. Mayor Ted Wheeler is the Mayor, and he has allowed Antifa to completely dominate Portland, Oregon. He has reportedly told his police Bureau to stand down during violent events.

To federal law enforcement: investigate & bring legal action against a Mayor who has, for political reasons, ordered his police officers to let citizens be attacked by domestic terrorists. https://t.co/5xyCDARICl https://t.co/c0Tf3SsKEf

“Those who facilitated or turned a blind eye to domestic terrorists—e.g., the Mayor—should be held fully accountable. By DOJ. By civil litigators. By criminal prosecutors. AND by the media.” Senator Ted Cruz

We have written extensively about Portland being the epicenter of violent Antifa activity. There have been allegations of a police “stand down” order by the Mayor for several years. But after journalist Andy Ngo and several others were severely beaten on Saturday, scrutiny may be coming home to roost against Ted Wheeler.

The following are Twitter photos, and they are graphic. Not one video of the day showed police intervening to stop the carnage. Many police officers were injured and three people arrested in the violence. But will any of the charges stick in leftyville Portland?

Adam Kelly attempted to help John Blum, but was severely attacked with nunchucks and a padlock inside of a sock. John had tried to help another person that was being chased by the mob, when he was beaten with a crowbar. The Antifa thugs beat them both bloody. The Portland police eventually took a report, but did nothing during the altercation.

“Portland cops did come to hospital, took a statement from Adam & opened a case. He doesn’t blame cops, but “feckless Ted Wheeler,” who also serves as the city police commissioner, which is a “big conflict of interest.”

Adam referred the cops to John’s case, but no cops responded to John, contacted him, or came to hospital where he was treated. Adam, who was worked in pvt security, notes that the precinct is 130 officers short because no one wants to work for Portland PD.” Michelle Malkin on Twitter

Criminal gang at work, brought to you by the total capitulation of @tedwheeler and his police force told to stand down. https://t.co/M2c3CE0qab

Ted Wheeler said he never gave a stand down order. But Daryl Turner, the head of the Portland Police Union said otherwise.

“Where are the voices condemning the lawlessness and violence? If this violence had been directed at Antifa, there would have been an immediate call for an independent, outside investigation. This is a perfect example of Portland politics at work and why our great City is now under fire in the national news.

The Mayor, our Police Commissioner, is not allowed to use the rank and file officers of the Portland Police Bureau as a shield to deflect Portland’s negative press nationwide. As we have said before and will continue to say: Police officers work to uphold the Constitution, including the right to free speech. It’s our job to ensure that our community can peacefully protest without fear of violence but right now our hands are tied.

It’s time for our Mayor to do two things: tell both ANTIFA and Proud Boys that our City will not accept violence in our City and remove the handcuffs from our officers and let them stop the violence through strong and swift enforcement action. Enough is enough.” Daryl Turner, President of the Portland Police Union

Back in October of 2018, Antifa literally took over the streets of Portland, damaging property, and harming citizens who simply tried to drive through town. They even “re-directed traffic”- chaotically, we might add. When Wheeler came under scrutiny, the left wing Portland council passed a bill that allowed the police commissioner oversight of the Portland Police Bureau’s actions. Mayor Ted Wheeler is the police commissioner.

If ever there was a need for Portland citizens who are watching this Mayor and council destroy what was once a lovely city, it is now. What Ted Cruz advocates is correct- it’s past time for the DOJ to investigate. Seriously, Portland, do you REALLY want this to be your legacy? Is your hate for Trump more important than the safety of your citizens? Ted Cruz advocates an investigation- do you?

Adam & John were at same Portland protest where @MrAndyNgo was beaten, but on other side at Pioneer Courthouse Square. They were there to support Haley Adams & speakers. Adam is foreground left – tall red-bearded man. John -older, white-haired man- was center/right being rushed. pic.twitter.com/1Sfegu2VyZ