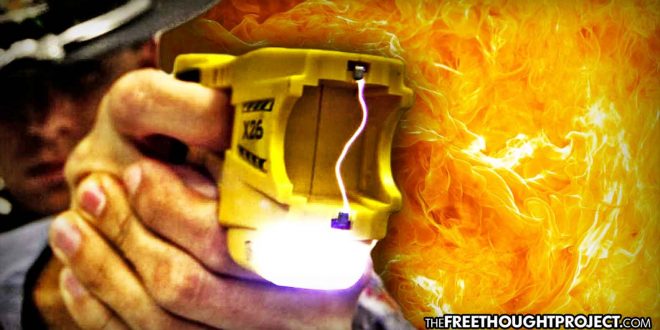 Arlington, TX — The family of an Arlington, Texas man is suing the city of Arlington after two police officers used their tasers on him — while he was soaked in gasoline — and set him on fire, killing him, according to a lawsuit. The lawsuit was filed in federal court last week.

The lawsuit also claims that one of the officers lied about using his taser and blames the Arlington Police Department’s use-of-force policy for Gabriel Eduardo Olivas’ death, according to the Star-Telegram.

The incident happened in July 2017 as Olivas doused himself in gasoline and told his wife and son that he wanted to kill himself. Olivas’ son called police who showed up and established no need to use deadly force as Olivas was unarmed, according to the lawsuit.

According to the family’s attorney, after police arrived, the incident unfolded as follows:

Constitutional rights lawyer Dean Malone filed suit in federal court in Dallas, on June 25, 2019, on behalf of the family. Mr. Malone said, “It is unfortunate that police officers chose to Tase Mr. Olivas, when he was doused with gasoline, after being told by a fellow officer that he would catch fire if he were Tased. This is also troubling because the officers’ prior training indicated to them the significant hazard of using a Taser when flammable fumes and/or liquids are present. Mr. Olivas died a horrible death as a result.”

The lawsuit mentions notes directly from a 137 page report by Detective Grant Gildon, who investigated Olivas’ death on behalf of the city of Arlington. In the report, Gildon backed up the claim by in the lawsuit that Jefferson originally told him he never fired his taser. However, Gildon told Jefferson that four prongs were pulled from Olivas’ chest, which meant that at least two tasers were deployed.

“Upon hearing this, (Jefferson) immediately stated that if two Tasers were discharged, then he had to of fired his Taser,” the lawsuit quotes Gildon’s report as saying.

The lawsuit points out that Jefferson should have been immediately fired after being caught in the lie. However, that never happened.

According to the Telegram, a grand jury eventually cleared Guadarrama, Jefferson and Elliot of wrongdoing.

“Arlington Police Department Officers were confronted with a dynamic and challenging incident involving a call where a suicidal subject had poured gasoline on himself and inside the house while holding a lighter in the presence of other innocent family members and officers,” the police department said in a statement Friday. “The officers had few options to try and diffuse the situation and remove the family members to safety. The autopsy revealed the manner and origin of the fire remained undetermined. The department thoroughly reviewed this incident and the case was reviewed by a Tarrant County Grand Jury.”

Now, after the department failed to hold them accountable, it will be the taxpayers who foot the bill for the officers who burned a man to death.

“His wife and his son saw him catch fire right in front of their eyes, saw the house catch on fire — that’s not an image that goes away easily,” Malone, said. “It had quite an effect on them.”