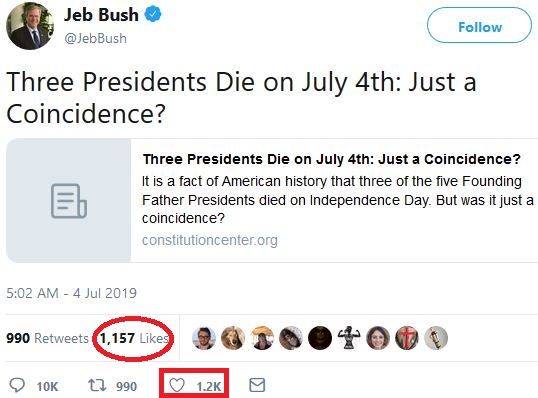 Courtesy of Fellowship of the Minds (from yesterday July 4, 2019)

Today is the 243rd anniversary of that first Fourth of July in 1776 when 56 men convened in a hot, stuffy room in Philadelphia to deliberate on and sign the Declaration of Independence.

Jeb Bush was the GOP establishment’s choice to be the party’s 2016 presidential candidate. But he lost the Republican primaries to Donald John Trump.

For that, Jeb and the other Bushes never forgave Trump. See:

This is how Jeb Bush chose to honor Independence Day 2019.

At 5:02 AM this morning, Jeb tweeted “Three Presidents Die on July 4th: Just a Coincidence?,” with a link to an article on constitutioncenter.org explaining how three Founding-Father Presidents—John Adams, Thomas Jefferson, and James Monroe—all died on July 4.

Is that a veiled threat directed at President Trump?

Tweeters in response to Jeb certainly think so:

@WillOBurns: “Why the hell would Jeb Bush post this today?”

@MarkDice: “We know you’re wishing for Trump to be added to that list. You and your family are war criminals and traitors to this great country.”

@OGwhiz: “Well, if anything happens to @realDonaldTrumptoday, guess where they’re going to look first, Jeb. “Projection” says a lot. Shame on you.”

@lauderdaleagent: “Are you threatening our @POTUS Jeb?!?! @SecretService @FBI Looks like a veiled threat. Reported.”

@DomPerty: “Why do you still have a security detail protecting this family when they are threatening the life of our current president?”

@DomPerty: “This was a threat on @POTUS – It came from a very wealthy, influential person who has many contacts in the government and lots of money to contract someone. If I was employed by the Secret Service and saw this post, it would become suspect and be deemed a credible threat.”

This isn’t the first time passive-aggressive Jeb Bush made a veiled threat against Trump.