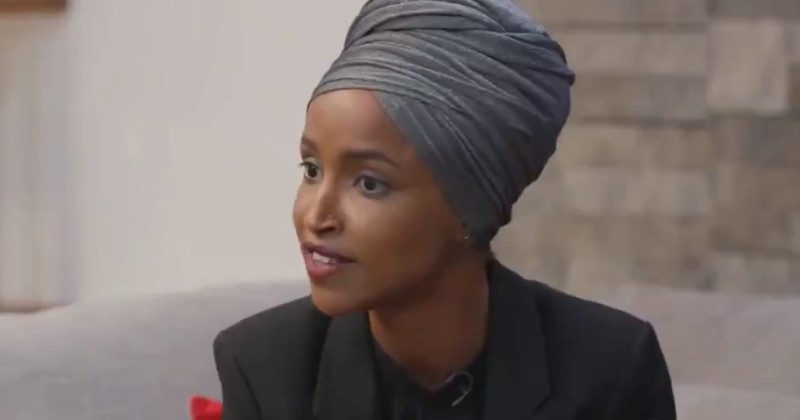 Her utter contempt for people of different colors simply knows no bounds.

She just called for the elimination of over 10,000 Latino workers.

I wonder what her brother, who used to be her husband, thinks about this?

It was probably his idea.

Congresswoman Ilhan Omar has called for “eliminating” Border Patrol officers because of their views towards black and brown people despite the fact that 51% of CPB agents are Latino.

The comments were made during an appearance on BET’s Black Coffee show.

“We have rogue agencies that have no accountability, no transparency in how they conduct their business, we know they have spoken in the most vile ways about immigrants, we know that they have certain views about what brown and black people deserve,” said Omar.

51% of CBP agents are Latinopic.twitter.com/GQUjf2cSrz

“So we should be having a conversation about eliminating their existence,” she added, before accusing Border Patrol agents of terrorizing migrants.

According to the Customs and Border Protection (CBP), over half of agents who guard the borders between the U.S. and Mexico and the U.S. and Canada are Hispanic. That number is from 2008, so it’s probably even higher now.

According to The Daily Signal, the number was still hovering around 51% as of 2016:

Pavlich’s figure is in the ballpark. About half of all Border Patrol agents—51 percent—were Hispanic or Latino at the end of fiscal year 2016.

What? Even the LA TIMES celebrates Latinos joining the border patrol. Yes, really!

The liberal LA Times did a piece about Latinos joining CBP in 2018.

It seems that Latinos are lining up for the chance to be border patrol agents:

Piled into a white van driving along the United States-Mexico border, the young men and one woman beheld the wall and weighed just how easily it could be conquered.

Isaac Antonio did not seem impressed.

Their chaperon, a Border Patrol agent, called out from behind the wheel: “Good luck, bro! I’m sure you can, but good luck.”

As debate swirled, Antonio described ways that the 30-foot-high wall could be defeated, which prompted the lone woman to finally ask in faux suspicion: “Are you from Mexico?”

Most of the nearly dozen participants in the El Centro Sector Border Patrol citizens’ academy were, in fact, of Mexican descent. And the mood was light as they learned about an agency they one day hoped to join.

President Trump has called for hiring 5,000 more Border Patrol agents as part of his war on illegal immigration.

Even LEGAL citizens of Latino descent are interested in securing our Southern Border.

So, once again Ilhan Omar has put her foot in her mouth.

Though her intent may not have been racist, she said what she said.

They say all is fair in Jihad and Politics, so I have to ask…

Ilhan Omar, why are you trying to strip jobs from hard working Latino-Americans?