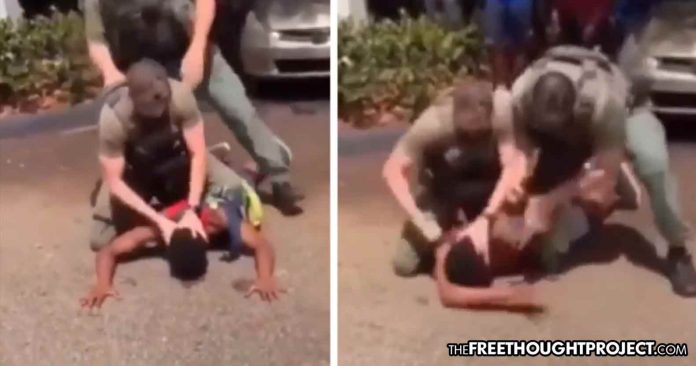 Tamarac, FL — Three deputies from the Broward County Sheriff’s office have been charged this week after they smashed an innocent teen’s face into the ground, leaving a pool of blood, and lied about it. The entire gruesome incident was captured on video.

According to CBS News:

A third deputy also has been charged with “falsifying the circumstances of the juvenile’s arrest,” state prosecutors said.

“Good officers are going to think this is a good thing,” the Rolle family lawyer, Sue-Ann Robinson, said.

“It’s too premature for us to say justice has been served,” she said. “The charges have been filed, which is a step in the right direction, and it shows that the officers are going to be held accountable for their actions, and we hope that eventually it leads to a successful prosecution.”

As TFTP reported in April, according to witnesses, a crowd of students formed outside the McDonald’s after school that day to watch what they thought was going to be a fight between two students — something that takes place in towns across the country. However, there was no fight and the only ones initiating violence appeared to be the cops.

According to witnesses, police showed up at the McDonald’s and yelled at the students to disperse. Those who did not disperse fast enough were then pepper sprayed. The video shows multiple teens hit with spray.

The witness told NBC 6 that when police first grabbed one teen to handcuff him, his friend approached the deputies to ask why he was being arrested and merely grabbed his friend’s phone. That teen was Rolle who was then doused in the face with pepper spray and thrown to the ground.

As the video shows, Rolle was not initiating any violence toward the officers and was merely attempting to rub his eyes and possibly cover his head from the punches being doled out by the deputy.

As the teen lies face first on the ground, one deputy holds him down while another punches him. After a couple of punches, the deputy then grabs the teen’s head and repeatedly smashes his face into the asphalt.

One of the videos shows the savage assault on Rolle while another shows him sitting on the ground in handcuffs with blood pouring down his face.

“The next thing you know, his head started bleeding and everything, and while he was getting handcuffed, lil bro got punched in the face by police,” one student told NBC 6.

After the incident, Rolle was rushed to the hospital to be treated for his injuries.

“It was outrageous that a deputy would do this to an unarmed student who was not fighting back, who was giving no resistance,” Broward County Mayor Mark Bogen said.

According to the report,

Sgt. LaCerra, 51, faces two battery charges for pepper-spraying the teen and throwing him to the pavement.

He also faces one count of falsifying his police report and one count of conspiracy to falsify records for “falsifying the circumstances of the juvenile’s arrest,” the state attorney’s office said.

Deputy Krickovich, 29, faces two counts of battery for slamming the teen’s head into the pavement and punching the side of his head.

He also faces two counts of falsifying police records and one count of conspiracy to falsify records.

“It is about time the three officers face the consequences of their actions,” prominent police brutality attorney, Benjamin Crump said Wednesday in an emailed statement. “Wearing a badge is not a license to hurt children and then lie about it.”

Below is the full video taken by one of the students, at the end you can see Rolle in handcuffs, sitting on the ground with blood pouring from his face. This kid’s only crime appeared to be questioning a cop. A disturbing notion indeed.

Broward County deputies are no strangers to controversy. As TFTP has reported over the years, these cops are violent, even deadly, and as the Parkland shooting showed us, they are also cowards.

One case in particular shows over-the-top the nature of the department as a cop attacked and choked an innocent dad — who was holding his nine-month-old baby boy.

Although the body camera video below was recorded nearly two years ago, it had never seen the light of day until a public defender recently discovered it in January, according to a report in the Miami Herald. The infuriating video shows deputy James Cady confront an entirely innocent father, Allen Floyd—holding his 9-month-old son—and immediately become belligerent, aggressive, and eventually violent.

“Quit f—– with me, boy! You hear me? Get your ID! Now!” screams Cady to an entirely innocent, compliant, and polite man whose done absolutely nothing wrong.

“Why are you being so hostile?” Floyd politely asks.

Cady answers, “Because you’re giving me s— and I’m tired of it!”

Moments later deputy Cady begins choking the innocent father as another BSO deputy yanks the baby from his arms. After watching the video at this link, it is no wonder that slightly older children are treated in a manner illustrated in the video above.