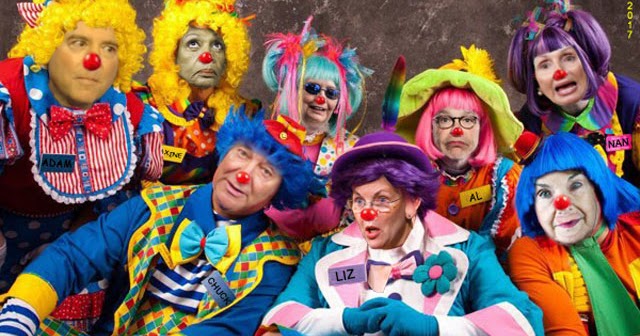 According to mentally deranged Democrat Rep. Frederica Wilson, all who make fun of Congress members online should be prosecuted. This is just the latest neo-Nazi Socialist to speak expressing her anti-American ideology. Sorry, but in the US, people cannot be prosecuted for making fun of government officials, its that pesky Article 1 in the Constitution.

It would be a different story altogether if we had members of Congress who were not so easy to make fun of, but when most of them dress and act like clowns, they can expect to be ridiculed.

As it is, many in the House have turned it into a circus, either by their ridiculous outfits, the comical or insane way they act, or both.

It’s hard to choose who is number one because we have so many weirdos in Congress, but to start things off, we have Dem. Rep. Rosa L. DeLauro of Connecticut, who dresses like a 1960s teenage hippy and could easily pass as a man at any given time.

Al Green, a Democrat Rep. from Texas, who acts irrational and does nothing at all but dream about impeaching the president. The man looks like someone you might find on the FBI’s 10 most wanted list.

Raul M. Grijalva of New Mexico has been a blazing alcoholic for decades and more than likely can’t even remember his own name most of the time, much less than do his job. He represents the pink elephants who visit him from time to time in the rare short periods when he is sober.

Kamala D. Harris, who will lie about everything from her ethnicity to having been segregated in her school years, has bad knees due to her efforts in advancing her career.

Mazie K. Hirono of Hawaii is a bubblehead who would be totally lost if not for her staff writing all her speeches and making decisions for her.  She’s a clown in a mumu.

Tim Kaine of Virginia, a devout anti-American Socialist who is the human version of the famed Grinch Who Stole Christmas

, which is very apropos, to a Socialist who does not believe in Christmas.

Alexandria Ocasio Cortez of New York is an irrational, overzealous, George Soros-selected plant in Congress who can’t tell the truth under any circumstances, as seen recently in her latest PR trip to an immigration detention center.  AOC has a problem with reality as seen with her multi-trillion dollar climate plan that is totally a pipe dream.  She is an easy target for jokes.

Ilhan Omar of Minnesota is another representative who can’t do her job because she is too busy trying to cover her past of marrying her brother and covering up campaign dependencies. Not a clown per se, but definitely laughable.

Nancy Pelosi of California: Now we are getting into the very core of insanity. Whether she is suffering from Dementia, Alzheimer’s affliction, alcohol addiction, or a combination of all three, she is incapable of giving a rational public speech. Pelosi is obviously in no position to govern and appears like a Saturday Night Live skit each time she speaks.

Adam B. Schiff of California:  The very appearance of this man suggests he is on some psychotropic drug due to him always having a surprised worried appearance, complete with bulging eyes. Kinda reminds me of Eyegore from Young Frankenstein

Charles E. Schumer should be Chuck Shroomer, given his spaced-out appearances with Nancy Pelosi.

Frederica Wilson of California dresses like one of the acts you might see at a carnival and acts the part as well with every public appearance. She definitely is one of the top Congress clowns.

Maxine Waters of California:  What can one say about Mad Maxine, other than she appears like a blithering idiot in each public appearance she makes. Wearing far too much clown makeup and razzle-dazzle jewelry bling, while calling for ‘Torch and Burning of all Republicans,’ she takes #1 spot in being an airhead and overall clown, supplying all of us with comical entertainment every day.

If I missed anyone, sorry, you just didn’t meet the criteria of clown, as simply being a criminal, anti-American, or both does not qualify you.