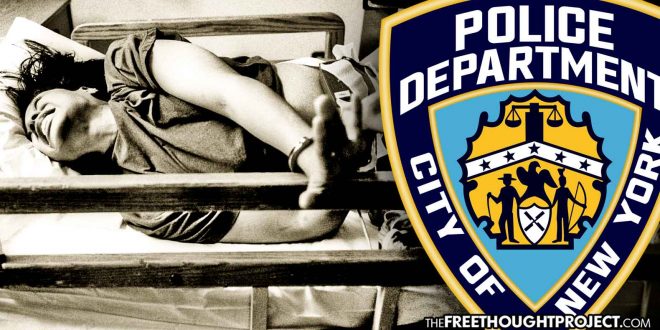 Share
Tweet
Share
Pin
A pregnant woman who was arrested over an alleged dispute with her ex, went into labor while being processed and forced to give birth in chains.

New York, NY — A young mother was just awarded $610,000 in taxpayer dollars after a lawsuit revealed how the New York Police Department forced her to give birth in chains. The woman, identified only as Jane Doe in the lawsuit was pregnant and went into labor hours after she was unnecessarily arrested on February 7, 2018.

After multiple horrifying events exposed the disturbing policy, in 2009, the state of New York banned the practice of shackling pregnant woman. Then in 2015, the law was updated to banning the use of any restraint on pregnant women.

Despite this law, however, reports like this one continue to surface.

According to the lawsuit, Doe was in jail after being arrested in Bronx County Family Court for violating an order of protection that was part of a child custody dispute with her former partner. She was 40 weeks pregnant at the time, posed no danger to anyone, and, according to her attorney, Katherine Rosenfeld, there was no need to even arrest her.

However, she was arrested anyway and placed in shackles when she went into labor. Unlike other instances which TFTP has reported, where pregnant mothers were forced to give birth in jail cells, Doe was transported to hospital. But the shackles, chaining her wrists to her ankles, were left attached—in clear violation of the state law.

“While she was in the NYPD’s custody, Ms. Doe never struggled, resisted, or acted in any way that would even remotely support the use of restraints,” the complaint said.

Once she got to the hospital, police refused to remove the shackles to allow this mother to have her baby. According to the lawsuit, multiple hospital staff protested to police to let her out of the shackles for the safety of her and her unborn child.

When doctors appealed to a police supervisor, they were told that shackling was NYPD policy, according to the complaint.

“Ms. Doe was terrified for herself and for her baby,” the lawsuit stated.

Giving birth is difficult enough, but being forced to undergo this pain while your hands and feet are chained together is utterly terrifying.

Finally, after repeated protests from doctors at the hospital, police removed the chain connecting her hands to her feet and she gave birth to her daughter. However, immediately after giving birth, cops put the shackles back on.

She was forced to feed her new daughter while in chains as she was arraigned for the alleged order violation in her hospital bed.

The lawsuit accused the NYPD of assault, unlawful use of restraints and violations of her constitutional rights. It was settled this week and Doe was paid out $610,000.

Naturally, the NYPD took no responsibility for their actions, admitted no wrongdoing, and never offered so much as an apology for shackling a pregnant woman in labor.

The department intends to amend its patrol guide “to better address safety and medical concerns” of arrestees in late stages of pregnancy and through child birth, Detective Sophia Mason said in a statement, according to CNN.

“At the same time, the NYPD will balance these needs with the safety of patients, medical staff, police officers, and others charged with the care and custody of all prisoners,” Mason said.

Clearly these words ring empty considering the NYPD is continuing to put pregnant women in chains despite the law being on the books for a decade.

The woman experienced “a horrific violation of her rights by the NYPD during one of the most intimate moments in a woman’s life: labor, delivery, and welcoming a new baby in her first day of life,” Rosenfeld said.

“The NYPD owes Ms. Doe a public apology for this incident, but the payment of this settlement and the revision of its policies will have to serve that function,” Rosenfeld said.

“This settlement, which includes significant reform to the NYPD Patrol Guide, was only possible because our client insisted from day one that she wanted to ensure that what happened to her would never again happen to another woman in New York” co-counsel Ashok Chadran said.

Hopefully, news of this lawsuit will try to ensure that.